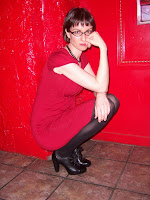 C. is glad that she was born in 1976 in San Jose, California, but wishes it would have been to a different family in a different house. Her childhood was unique and painful. In those terms, it’s difficult to say more than that. At 4, C. moved to Utah with her family, which was Mormon, which led to certain problems. At 7, C. started playing piano, and, at 12, she realized music would be her life's calling. She thought she would be a concert pianist, but it didn’t work out. At 14, C. realized that there were problems with being a Mormon, and only now does she realize that this was part of the reason she ran cross country in high school (she was trying to get away). At 15, C. stopped studying classical music when the piano became restrictive. After that, she picked up the guitar because her boyfriend played guitar and wrote songs, and she wanted to do everything that he did. When she was 17, C. was out walking when she had a realization—she stopped walking and decided to leave the Mormon Church—then she began walking again. The decision was easy in the moment, but it took a lot of will power to get to that moment. Please know that C. is not a recovering Mormon or a Jack Mormon or even culturally Mormon. When C. left, she left for good. It will always be part of her past, but it is not part of her identity.

In college, C. was an English major, but didn't stay long enough to finish her degree. For years, she has felt the need to keep moving—moving away from her family to Colorado Springs to Seattle to New York City to Los Angeles to San Francisco to Los Angeles again and to Baltimore (21 total addresses). Now C. is a shampoo girl by day and a musician by passion. She’s not sure what she wants from music anymore, but she’s trying to tap back into what she likes about music, what naturally comes from her, whether anybody likes it or not. It's hard. She doesn’t know what will come of it. C. is also starting massage therapy school and looking forward to learning about anatomy and physiology. She looks forward to being able to help people. C. is kind. C. wishes that she could sort out her relationship with music. She has a feeling it will happen naturally as she sorts out her head. Eventually, C. might find somebody to play great music with and to tell that she secretly loves romantic comedies. For now, C. likes Baltimore and she has finally moved far enough away from home to stop moving. But she has also developed a sense of pleasure from that physical movement and knows she won’t stop. She could move to Chicago or London. She could go to Philadelphia or Rome. Now she can go anywhere.
Posted by Michael Kimball at 10:39 AM

I didn't know there were comments here!

Thank you, Mr. Kimball, for taking my haphazard life and making a lovely story out of it.

And thanks to Anonymous for being so sweet.