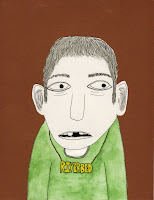 Andy Riverbed describes himself as “a fish with a big wide mouth.” He hates shit-talkers and sticks to his word with all his heart. Andy was born in Newark, New Jersey where he attended a privileged private black school. It was the best school experience of his life and the fact that he’s not black never seemed to be a problem for anyone there. He played baseball and futbol in high school, and got along with his younger sister, Rebecca, whom he loves very much. Andy went to college in Puerto Rico, where his parents are from, and studied English lit because he loved to read books and loved to write. He dropped out of college twice, the first time because he went insane and the second time because he got strung out on drugs. He moved to Florida, went to school there, straightened out, and started studying linguistics because he was sick of literature. He’s still studying linguistics and he’s also translating fiction and poetry from English to Spanish. His pen name is Andy y la Rivera, which means Andy Riverbed. Andy also works in a bed-and-breakfast and sings in a punk rock band. The punk rock lifestyle wasn’t productive when it drove him to run away from home to go to shows, do drugs, and fuck up in school. Now that he’s pulled his life together, he loves singing punk rock and he loves hanging out with his bandmates. Andy was in love once. He bought his girlfriend a ferret named FatBoy McPopcorn after she had an abortion, but the relationship ended badly when she left with the ferret. Andy got McPopcorn back and loves him because he’s Irish and he makes out with Andy when he has beer on his breath. Andy is happiest with the right person’s warmth against his skin. He’s happy singing in his band, too. Andy is proud that he’s still alive and hasn’t given up. He’s applying to graduate school now, trying to get a real job, and trying not to bore himself to death.