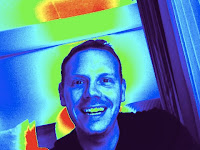 Shawn Theron was born in 1972 in Baltimore, MD. He grew up in one of those modular homes that are trucked to the lot in halves. There was a huge backyard and Shawn played in the woods with his sister and his best friends, Jenny and Erin. They had their own Twisted Pine Nature Trail that they built together. When Shawn did go inside, he had to deal with his mother, a severe alcoholic, which was not fantastic. Long nights dealing with his mother meant that Shawn didn’t quite have the bandwidth for school. He always felt exhausted and teachers’ advice just seemed like criticism. Once, Shawn brought home a report card with grades that spelled D-E-A-D (the A was in art). When Shawn was 16, his mother and father divorced. After that, Shawn moved in with his paternal grandmother, Red (he named her this when he was 10 because she lived in a red house, drove a red car, and wore her red hair in a beehive).

With Red, life became more normal and Shawn could finally breathe. Shawn loved their impromptu road trips (like going crabbing in Annapolis, which, with all the Navy guys around, was amazing for a super young gay guy) and how much fun it was to get lost together. He loved their late night conversations at the dining table while the quiet of the world wrapped itself around them. Red became Shawn’s mother and his best friend and his own personal movie star. Shawn finished high school, but only managed a semester at the local community college. Shawn suspects he has learning issues, but the schools didn’t really test for that then. After that, Shawn started working in Baltimore restaurants—everything from bartending to waiting tables to managing, eventually winding up at Joy America Cafe, which used to be in the penthouse of the Visionary Art Museum. This brought Shawn close to art, but he hadn't started painting yet. In 2003, Red died, cancer. Before she passed, Red told Shawn to do big and great things with his life. She also gave him the word SOGH.

Shawn didn’t know what the word meant, but, in the beginning, SOGH was Shawn’s computer and his camera, which recorded the most profound moments of his life. About 3 years later, Shawn moved back into Red’s house, which had these huge shelving units that he dismantled and started painting. Those shelving planks were the first SOGH paintings. Not long after that, Shawn went public with SOGH. Shawn’s friend Rebecca (the visionary behind the Visionary) was a huge source of encouragement and his friend Ted offered him wall space at the museum store at the Visionary Art Museum. 30 minutes after the paintings were hung on the wall, 2 paintings sold (61 the first month, 1357 the first year). Shawn feels spectacularly blessed. Painting is his whole life and, to help, Shawn’s father spent his nights and weekends (for almost 2 years) building a studio so that Shawn could make even more paintings (just one way his father has been there for him). 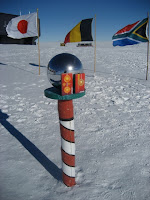 Now Shawn’s mission is to get SOGH to every city around the world. So far, over 10,000 paintings are circulating the globe—including Afghanistan, the South Pole, and one at the Eiffel tower. SOGH has changed Shawn’s life. SOGH is something meaningful that everybody can be a part of. No matter where it hangs, SOGH comes from the past and places a message in the future.

shawn is one of the most amazing loving inspirational people i know.. i bought one of his first paintings and i have loved it ever since..
and his work which just keeps getting better and better..
however, his art is nothing compared to his great big awesome heart.. iloved reading this piece.. i sprad the SOGH word wherever i can .. which right now is in my new home in Peru-. love you shawnie.. sarita brown

Beautiful tribute to an artist whose heart is as large as his body of work. We love Shawn.

shawn is the truest example i know of how hope & inspiration can grow from even the deepest sorrow.

red was an amazing woman, indeed, and shawn has her very same spirit.

you inspire me, friend.

Shawn makes his brilliant,spiritual art accessible to everyone. His openness and loving personality is reflected in his brave strokes and sparkling finishes. Good story...bravo to you both!

I met Shawn for the first time 30 minutes after he put up his paintings at AVAM and i am the proud owner of Milky Way. i paid $15 for it which i thought was too little and i think he thought was too much. silly boy. since then, he has sent me paintings in peru, made me laugh, made me sing, inspired me when i felt low and generally been an amazing giving loving spirit in the world.
he shows that no matter how tough, life is transcendant. he is transcendant. i love him. his art speaks joy to the world!!