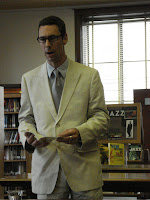 [Get Words by Andy Devine.]
Posted by Michael Kimball at 9:41 AM

Andy Devine week has been awesome! He's a force for good fiction. Thanks, Michael!