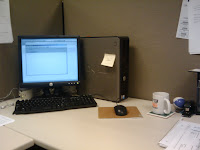 At about three o'clock Central time, the cubicle wall was born at average height. The cubicle wall was happy about this, but before long he was laid flat and wrapped in cardboard. He was stacked somewhere. (He didn't know where because he couldn't see on account of the box he was in and also because he didn't have eyes or a brain.) He stayed there for several long days. He started to cry through his fabric. Then, earless, he heard a truck and felt himself lifted onto it. There was a rumbling. In the truck he traveled until the truck stopped, whereupon the cubicle wall was unloaded. He was elated when the box was peeled away and he was fastened to some other beige cubicle walls in the form of a box. Together with a computer and some pens they became a community. A phone came along and joined the group. The computer was friendly, but the pens were often short. The phone had a whiney ring. One day, and then repeatedly every weekday for three years, a good looking young man came and sat in front of the beige cubicle wall. He touched the computer, the phone and the pens. He rarely touched the cubicle wall except, occasionally, to stick some sheet of paper to it with a pin. The puncture didn't hurt nearly as bad as the feeling of being ignored. The young man seemed not to care about the cubicle wall. It was even as if the cubicle wall represented something hateful to the young man, or if not hateful, at least unbearably mundane. But the cubicle wall was resolute. He would be there for the young man tomorrow, too, and the next day, and the day after that. Oh yes, the cubicle wall would remain a presence in that young man’s life for many long years.