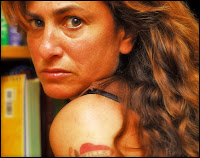 Leslie F. Miller was born in Baltimore on the eve of Yom Kippur, the day one is supposed to do no labor. By 7, she was a great swimmer. She was also one of the early latch-key kids. Growing up, she sometimes ate frosting out of a can for dessert, which is a partial explanation for why Leslie can’t control herself around cake. Leslie liked to sing in front of the mirror with a hairbrush for a microphone. She wrote poems that got passed around the school because everybody could relate to Leslie’s poems. On her Sweet 16 birthday, her three best friends stopped talking to her, though years later they apologized. After this, Leslie remembers sitting in the dark in her walk-in closet listening to Patti Smith and writing death poetry. She knows what it is like to be without friends. Around this time, she started going to see bands and she once met the Ramones after she was thrown out for standing around backstage. In the early 1980s, she was one of the first people to rollerblade. In college, Leslie joined a band that once opened for the Thompson Twins, but her bandmates did too much cocaine and the band broke up. It was around this time that Leslie met her husband and they have been together ever since even though he wasn’t her type—a hippie with long hair and a beard. He was nice and funny and smart and she loved the way that he played guitar. After over 10 years together, they got married so that they could go on a honeymoon. Years after that, their daughter Serena Joy was born (so named because her mother thinks of herself as Neurotic Misery). Serena is psychic and can read Leslie’s mind at the strangest times. Once, Leslie chopped off the tip of her thumb. Also, her hands fall asleep when she raises them over her head. What else? She’s a writer and a mosaic artist and a photographer and she’s good at being each of them. What else? She used to teach college, but doesn’t anymore and she feels pretty good about that. One more thing? Sure. Leslie’s one goal in life was to have a book published: Let Me Eat Cake—which is a kind of history of cake, including cake folklore and lots of interviews with people who love cake—will come out Spring 2009. 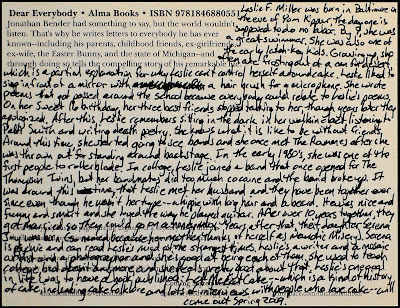 Posted by Michael Kimball at 8:38 AM

Hooray for us both! Thank you, Michael!

The sweetness of the Cake Lady, undeniable.

What a fantastic life story, and I'm so lucky I know this particular life in person.

Michael, these are amazing... I came for Leslie's but stayed to read as many as I can!

Cake! Leslie sounds amazing. I love the picture of the postcard, too.

Thanks, Diana. And thanks, Paula. I love writing them for people.

Although I only know her from the webs (yet), you seem to have captured some of the essence of her sparkling life and personality pretty well.

Great project! Off to read some more...