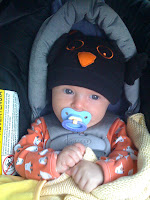 Laura and Mike met at an improv class, one of the results of which was Baby Charlotte, who was born June 13, 2008, which was 3 weeks early. Also, she was face-up, which meant that she was delivered in a c-section, which meant that Charlotte was kind of perfect when she was born. Shortly after this, Charlotte’s father introduced himself and she immediately became calm. She already had that much confidence in her mother and her father. At first, Charlotte could only focus on objects that were within 6 inches of her face, but now she can see much farther than that. In fact, she prefers to face out when she is being held. She wants to see everything. Charlotte started smiling very early in her life, an early sign of her happy temperament. She doesn’t cry much and one of the few ways she shows discomfort is by pushing out her lower lip. Charlotte is good at drooling, blowing spit bubbles, and laughing. She has the brightest face and slatest blue eyes. Charlotte is currently obsessed with her hands. Her bedroom is filled with animals and books. She loves the Belly Button Book and Pat the Bunny, which is also a book. Over her crib, there is a mobile that has a monkey, a bird, and a frog. It will be years before she believes that only one of them actually flies. She loves to lie on her back, kicking and talking. She loves to sit up in her red chair and to stand up if you hold her up. She loves being swaddled. She loves it when her mother holds her in her arms and swings her around. She loves being tickled. She loves her orange friend, which is maybe a cat or maybe a rabbit. Nobody really knows. Charlotte likes to wear hats, but she often kicks the booties off her feet. She mostly wears hand-me-downs from their friends' children. Over the first 4 months of her life, Charlotte has had a wide range of nicknames—everything from Tater Tot (in utero) to Charlotte O-town to Charlotte Poo Poo, which later turned into Charlotte Popovich, to Char-Char Binx, which later became Binx. She doesn’t find any of this confusing. In fact, she is quite proficient at her own gibberish. Recently, she has been imitating a lot of facial expressions. Recently, there has been a lot of tummy time and Charlotte has been working on rolling over. Charlotte is loved so much that she can’t wait to grow old enough to start talking with words that her mother and her father understand so that she can tell them how much she can feel it.
Posted by Michael Kimball at 9:58 AM

And what a treasure this will be for Charlotte's baby book. :)

I have so much in common with her! I am excellent at drooling, blowing spit bubbles, and laughing, and I love facing out. I also show dissatisfaction with pushing out my lip, but I have some expletives I say at the same time. She will learn these in time.

The baby book, I didn't even think of that.

And, yes, Laura is wonderful. So is Mike. So is the family cat. Yeah, Charlotte is going to have a good childhood.