#85 The Many Parts of Mike Marcellino 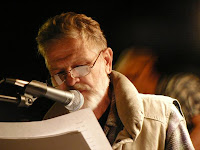 Mike Marcellino was born in Baltimore and, like Baltimore (in part), he is part English, part Scottish, part Irish, part French, part German--and he was raised Italian. When he was 3 years old, his parents split up—and he stayed in a hotel in Miami Beach with his mother. There is a family story that he fell off the hotel’s three-story balcony and landed on his head, but Mike doesn’t remember that. What he remembers is meeting Tony from Cleveland who was impressed with his Superman act (think bathing suit and pool towel for a cape). Tony was also impressed with Mike’s mother, later marrying her, becoming Mike’s step-dad, and moving the family to Cleveland. Mike also remembers his great uncle Buddy, a Hall of Fame jockey, which may explain Mike’s great affinity for riding his bike. Many years later, Mike joined the Army and became a combat correspondent in Vietnam. Mike continued as a journalist after he came home and brought good attention to difficult issues concerning the wellbeing of veterans. Mike is proud to have served and misses his veteran brothers, both the living and the dead. In the early 1980s, Mike jumped from journalism to politics. He worked as a political aide to former Cleveland Mayor Michael White and to former Congressman Louis Stoke, where he did more good work on human rights and veterans rights issues. The other thing to know about Mike is that he has always lived by the water. He met Joan Baez near the banks of the Cuyahoga River. And while there is no surf in Cleveland, one of his life’s greatest moments was surfing alone in a perfect thunderstorm in St. Augustine. Along the way, Mike had three great kids. He loves them dearly and loves how they each grew up into their own uniquely independent free spirits. Mike has always been out of the box too and he likes it that way. Now he’s a poet and the front man for the band Split Pea/ce—making music out of poems he wrote in a bunker during mortar and rocket attacks in Vietnam.


More Mike Marcellino
Listen to Split Pea/ce
Posted by Michael Kimball at 8:59 AM

Thanks Michael, you're a good guy. (I asked Michael to give me a link to this for an interview.)