#111 Aaron Goolsby: He Can Go Anywhere 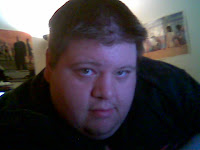 Aaron Goolsby was born in Oklahoma City, OK and then adopted into a Mormon family where he grew up with all the love in the world. He was a sick child, though. His mother was often sick too. They spent the first 5 years of his life mostly together, mostly in bed, the both of them sick. When he was 6, he wrote a book about a bird and a bee being friends. For the first 9 years of his life, he went to the same church as his biological family, though he never knew it. Then Aaron’s adopted family moved to Witchita Falls, TX for his dad’s job as a special agent for the railroad. That year and the rest of 4th grade were difficult—the OK schools were behind the TX schools. Also, he was always a big kid and sometimes he got picked on because of it. That spring he fought back for the first time and got kicked out of the school system (and ended up going to a private Catholic school). As a Mormon, Aaron read a lot, both scripture and literature; Aaron loved reading science fiction and fantasy; the other worlds were a perfect fit for him. When he was 15, Aaron met his biological mother, who is Hispanic, and this created identity issues for him. He didn’t really know who he was anymore. This was compounded by his weight. Sometimes he would act in ways that were not him, act the class clown, the stereotypical fat kid, just so that other people would like him. It worked. They did. When he was 19, Aaron went on a Mormon mission to California to preach the gospel. After 9 months, he was hit by a truck, and, even though he was OK, he used that as an excuse to go home and see his mother, who was very sick. His mother was always his savior and he was grateful for being adopted by her. She died when Aaron was 20, which was terrible and confusing. Aaron left the Mormon Church and started spending more time at the bowling alley (he had grown up a bowler). Within a couple of years, Aaron was drinking and doing whatever drugs were available—mostly psychedelics like acid, mushrooms, LSD, but also lots of cocaine, plus prescription pills, especially anti-anxiety pills. During these 10 years of drugs, Aaron worked at a Pizza Hut, worked as a security guard, and wrote three bad novels. He has always been a writer—a tell-all person. After a couple of near-death episodes, especially a bad LSD trip that he almost didn’t make it back from, and visions of Chris Farley, Aaron got clean. He didn’t want to end like that. Now he’s living back in Oklahoma City and working for Southwest Airlines. He loves the free travel. He can go nearly anywhere. He just has to decide where that is.
Posted by Michael Kimball at 5:45 AM

I love this man. A very close friend of mine, and a wonderful person to have the pleasure of knowing.

Thanks for stopping by, Amy. I feel lucky that Aaron shared his life story.

I knew Aaron in Amarillo from the bowling alley's and never realized he had been through so much. Hope all is well and good luck Aaron.