I have an interview with Ingrid Burrington up at The Faster Times. We talk about word-things, protest signs, Venn diagrams, etc. 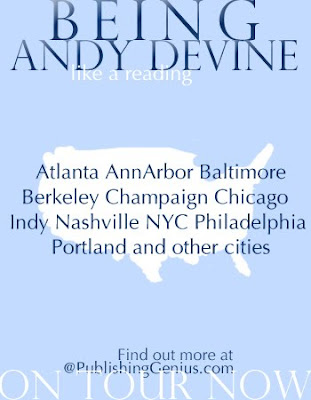 Being Andy Devine (BAD), the national book tour for Andy Devine's first book, WORDS, is underway. The next stop is Providence for couscous sur l'herbe on October 26. From 9-10, there is music with Jonathan Bonner Cape Breton Fiddle and Laila Aukee Ukelele plus Vocals Extraordinaire. From 10-11, it's Andy Devine with Mairead Byrne, Karen Donovan, Rachel Glasser, and Mike Young. From 11 on, Dave and Mark play the blues.
Posted by Michael Kimball at 1:11 PM No comments:

The mudluscious 2011 titles are up for looking at their covers and subscribing and such. I have a little piece in [C.] the stamp story anthology, as does Andy Devine.
Posted by Michael Kimball at 1:06 PM No comments:

There's a great post about literary fundraising (and other kinds of fundraising) and kickstarter by Rebekah Silverman over at htmlgiant. It mentions The Understanding Campaign, which is making its last push for funding. There's also Ampersand's re:Telling anthology, in which the postcard life story project is part of the $100 premium.
Posted by Michael Kimball at 12:40 PM No comments:

[Update: Andy Devine is currently on a national tour for his first book, Words (Publishing Genius). See Being Andy Devine for tour dates.]
Posted by Michael Kimball at 12:09 PM No comments: 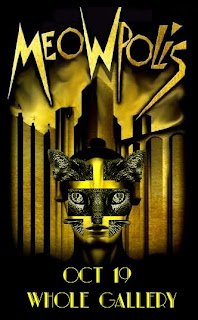 I'm very excited to be a part of Meowpolis, a show of cat art, as is Moose the Cat. The show will open on October 19th at Baltimore's Whole Gallery, which is 405 W. Franklin Street, which is the H&H Building, 3rd Floor. Thanks to Rahne Alexander and Freda Mohr for putting it together.
Posted by Michael Kimball at 10:41 AM No comments: 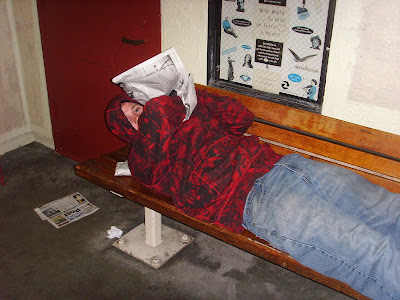 [Update: Jason McCormick lived in the Adirondacks, off the grid, for the last few months. If you didn’t get an email back from him, that’s why. Jason also graduated from college and is a philosopher now. He feels pretty good about it, but he’s not sure how the job market feels about it. Jason is also writing a philosophy column at Outsider Writers Collective and Press and a weekly humor column at Hobo Pancakes. He’s also co-hosting (with Meg Pokrass) Fictionaut's reading series in San Francisco.]
Posted by Michael Kimball at 12:06 PM No comments: 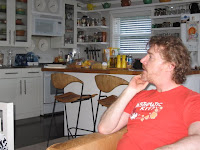 I have a new piece called T-SHIRT that is about a t-shirt up at Blip (formerly Rick Magazine and, before that, formerly MississippiReview.com). Thanks to Blip's This Week editor Meg Pokrass.
Posted by Michael Kimball at 10:11 AM No comments:

A Monument to Love

There's a great review of Lo Que Queda de Nosotros, Tusquets' Spanish translation of How Much of Us There Was. Pepe Rodriguez calls the novel "a monument to love" ("un monumento al cariño").

New York Tyrant will release How Much of Us There Was in the US in early 2011.
Posted by Michael Kimball at 11:35 AM No comments:

Labels: a monument to love, How Much of Us There Was, Lo Que Queda de Nosotros, New York Tyrant, Pepe Rodriguez, Spanish translation, Tusquets

A Sentence of Mystery

I have an interview with Matt Bell up at The Faster Times. We start with the ways in which Matt begins a fiction, talk about working with ideas and working with language, and then finish with the way a fiction ends.

The Andy Devine Tour kicked off in Baltimore, made its way to NYC (attached), and will move on to dates in Muncie, Indiana -- Portland, Oregon -- Nashville, Tennessee -- Philadelphia, Pennsylvania -- back to Baltimore, Maryland -- Ann Arbor, Michigan -- Brooklyn, New York -- et cetera. Even if you don't live in any of those place, you can still read WORDS to yourself.
Posted by Michael Kimball at 11:12 AM No comments:

The good Ellen Moynihan has written the postcard life story of Michael Kimball Writes Your Life Story (on a postcard). It's at The Dirty Durty Diary.
Posted by Michael Kimball at 12:26 PM No comments: