This Was Pretty Nice

Baltimore Magazine included me on their list of Top Five Writers -- along with John Waters, Laura Lippman, Madison Smartt Bell, and Stephen Dixon. Here's the blurb: "One of the funniest guys around wrote Us, one of the saddest and most poignant books that you'll ever read."
Posted by Michael Kimball at 10:18 AM 2 comments:

#298 Michael Davidson: How Dangerous He Can Be to Himself 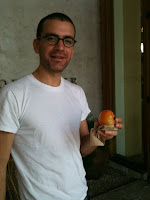 Michael Davidson was born in Miami in 1979. At 2, his parents moved him to Houston and he had a fun childhood there. His parents weren’t over-protective, so he ran around the pool and swam a lot. He rode his bike, walked through the woods, and carved his initials into a gazebo. He climbed onto the roof and leaned against the chimney whenever he was locked out and no one was home. He didn’t read much. He stayed home from school and watched cartoons. He mostly ate grilled cheese sandwiches and mac ‘n cheese. Michael’s first hobby was collecting baseball cards, which he still has, and the stack is a personal reminder of what it means to grow historic. When

Michael was 12, his parents moved the family to Barranquilla, on the coast of Colombia, where his mother is from. There, Michael played tennis on red clay courts and Ping-Pong in his sister’s room. He ate arepas and empanadas and deditos. Cheese follows Michael everywhere he goes. In high school, Michael played tennis and did yearbook, which probably helped him get into college, where he studied economics, thinking it would help him get a job. This was a misconception. So far, he hasn’t used his degree for any specific kind of employment. Michael has done remote work for Google, worked as a golf range ball picker, a residential appraiser, and a math tutor. Michael has lived with his wonderful girlfriend Bridget since 2007 and he can’t stop making her smile because he likes seeing her smile so much. Also, Bridget makes home feel like home and he likes it when she plays the piano, which makes him think about how beautiful her mind is. For a while, Michael thought that signing the mortgage to his first home was an important event, but deciding to get out from under the mortgage and start living well again, free from being indentured to the bank, was more important. Here’s a subject change: Michael can only clip his nails outside. Something else: he has a scar between his bottom lip and chin that isn’t small. He got it from the Pacific Ocean, which picked him up when he was body surfing and slammed his face into the seafloor, where he floated around underwater and thought he was going to die. When he surfaced, he felt the sun and laughed, but he couldn’t talk right and part of his mouth was collapsed. Michael didn’t know what kind of person he was until the Pacific Ocean hurt him. He sees the scar in the mirror every day: He sees people staring at the scar when he talks. It’s a reminder of how dangerous he can be to himself. 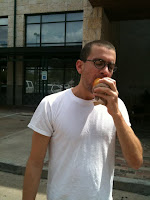 In 2009, Michael’s grandfather died and he hadn’t seen him for nearly a year. He can’t remember exactly what he said or what he looked like the very last time he saw him. In 2010, shortly before his grandmother died, he held her hand in the hospital and said goodbye. This somehow lightened the weight of losing her. Recently, Michael learned how to handpress paperback novels right on his kitchen table and he named the enterprise Tiny TOE Press, which published his first novel, Austin Nights. Michael is happy and healthy and at peace with everyone around him.
Posted by Michael Kimball at 8:56 AM No comments:

Me and Us on WYPR

I recorded this segment for WYPR's Maryland Morning with Sheilah Kast a couple of months ago and missed it when it aired, but the podcast is available now. Before me, there are segments about crime in Baltimore and a study about news sources, then I'm around the 24-minute mark. Tom Hall is an incredibly generous question-asker.

Posted by Michael Kimball at 7:07 AM No comments:

The Beautiful Sadness of Impermanence

There's a wonderful review of Us at Word Riot, which says, in part: "In his latest novel, Us, Michael Kimball delivers a gripping, forceful ode to that almost-forgotten lifelong theater of affection and agony between a man and a woman, an impeccably rendered meditation on what the Japanese call mono no ware, the beautiful sadness of impermanence. ... [Kimball] has taken contemporary fiction and turned on the light of a sparsely decorated dark and beautiful room to which it has perhaps never been." Many thanks to Chris Vola and to Jackie Corley.
Posted by Michael Kimball at 10:45 AM 1 comment:

Thank you to the wonderful Penina Roth and to everybody who packed the room at Franklin Park. Julie Jackson has a great write-up of the event at Electric Literature, along with a blurry photo of me "kicking ass at the mic."

But if you couldn't come out to Franklin Park, you can still hear me read on a podcast at InDigest. If it's not a great recording, that's my fault or Garage Band's. Many thanks to Dustin Luke Nelson.

Posted by Michael Kimball at 9:07 AM No comments:

Plus, Sadie Stein at The Paris Review wrote a nice tidbit that calls Us "heartbreakingly lovely" and the writing "a pleasure."
Posted by Michael Kimball at 11:31 AM 1 comment:

The Kindle version of Us is now available. Many thanks, as always, to the Tyrant and to Tyrant Books.
Posted by Michael Kimball at 11:44 AM No comments:

I'm excited to be reading in the Franklin Park Reading Series -- with Joshua Cohen, Kio Stark, Amy Benfer, and Robert Tumas on Monday, August 15th, 8pm. All the details are at the link. Many thanks to the wonderful Penina Roth for putting it all together.
Posted by Michael Kimball at 11:23 AM No comments:

I have two short fictions in the new Fiddleback -- "Introduction" from a longer work and a one-off called "Airplanes Turn into Stars at Night." Many thanks to Daniel Long, who also has a great interview with Gary Lutz in the issue. Also, check out the fiction by Michael Hemmingson, Kevin Fenton, Bobby Dixon, and J.A. Tyler.
Posted by Michael Kimball at 10:43 AM No comments:

Welcome to the Golden Age

There's a wonderful group review -- books by Blake Butler, Scott McClanahan, Joshua Cohen, and me -- in the Charlotte Viewpoint. Jeff Jackson makes an interesting argument -- that "we’re living through a golden age for American literature" -- and then goes on to say nice things about each of our books. Of Us, he says, "this examination of love, grief and family makes these universal themes seem achingly fresh. ... Us delivers a powerful emotional experience."
Posted by Michael Kimball at 12:00 PM No comments: