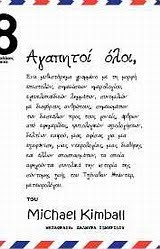 I'm very excited about this one, Αγαπητέ όλοι, the Greek translation of Dear Everybody.
Posted by Michael Kimball at 10:57 AM 1 comment:

Brin-Jonathan Butler was born in Vancouver, the son of a Gypsy mom from Budapest and Dutch lawyer dad. He was a really happy kid until he was about 11 years old. That was when a group of kids tricked him into going to the woods to see a fight. He didn’t realize he was about to be beaten up and swarmed by a huge crowd of kids. He just remembers a lot of feet coming at him and a hailstorm of phlegm. That attack left him afraid to leave his house for 3 years. When he was 13, Brin started riding the school bus with one girl even though he lived a block from school. He was afraid to talk to her, but he watched her read her book everyday. That was about the only thing that kept him going for a few years. Later on, Brin wrote his first book about that bullying incident and the girl he stalked on the bus. A decade after he last saw the girl on the bus, she found him on Facebook and asked for a copy of the book. After reading it, she flew over from Europe and wanted to get married. That was weird. When Brin was 15, he caught a Mike Tyson interview on TV where he talked about being bullied growing up and the books he was reading in solitary confinement. The next day, Brin went two places he'd never been: a library and a boxing gym.

He read about Tyson's life and how he'd been serially picked on for being a sensitive kid (and, 15 years later, Brin sat in Mike Tyson's living room thanking him for saving his life by introducing him to boxing and books). Brin’s first day in a boxing ring, he was knocked unconscious, but it was less scary than showing up to the gym in the first place so he went back. Boxing taught him that cowards and heroes feel the same, but act differently with those feelings. At 20, Brin became obsessed with Cuba, a place where books and boxing meant more than anywhere else. He trained under Olympic coaches in Cuba and boxed as an amateur light-heavyweight. For a couple of summers, he hustled speed chess in the park (Bobby Fischer was always a hero of his) before teaching boxing to support writing fiction and making films.

Brin met his wife on Facebook and propositioned her the moment he saw her photo on a friend's page. She had on a furry ski hat and a strange in-between expression. He asked her to fly to Vancouver and when she didn't write back he called her in Manhattan and asked what time he was picking her up at the airport. They spoke for an hour and he called back the next day. 3 days later she flew over. In 2000, Brin visited Cuba and discovered a haunting and beautiful place. Brin has spent the last 11 years going back as often as he could and he knows less about it now than when he first visited. Right now, he’s directing a film about a Cuban boxer who left his home and family to shipwreck into the America Dream and working on a memoir about his time in Cuba. He’s happy and excited to find out what happens next in New York City. 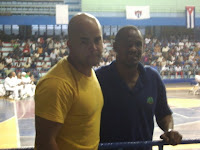 [You can read about Brin’s meeting with Mike Tyson and other writings here, as well as more about his documentary at Hero, Traitor, Madness. You can find out about taking boxing lessons with Brin here.]
Posted by Michael Kimball at 9:09 AM 2 comments:

You Must Use a Filter!

I have an interview with Deb Olin Unferth up at The Faster Times. We talk about Revolution, writing fiction versus writer memoir, earnestness, irony, running, and the necessity of using a filter. 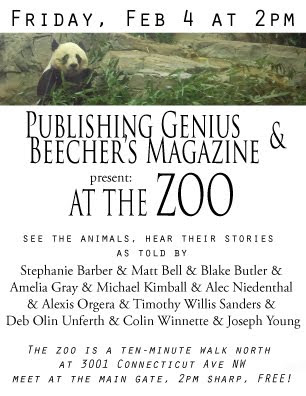