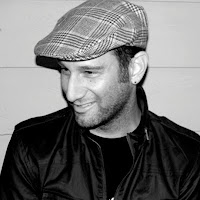 Matty Byloos was born in Los Angeles and raised in various parts of the San Fernando Valley (a Valley Boy, if there were such a thing). Matty’s childhood was great and his family was pretty typical of Italian-American families. There was lots of extended family around and everybody played a ton of cards. They all loved baseball and large meals. Everybody had a sarcastic sense of humor, so teasing was prevalent. Then, when Matty was 11, his grandfather, the family patriarch, died and everything fell apart.

His immediate family stayed close—Matty and his sister have always been friends and his parents stayed together—but everybody else drifted away. For some reason, as a kid, Matty loved the movie Wall Street. Also, he attended an all-boys, Jesuit high school near the city center of Los Angeles, just a few miles from the LA riots that happened in 1992. The school was shut down for a while and it was like entering a warzone when they went back—entire city blocks reduced to rubble and ash, blackened and charred. That has always stuck with Matty. The other standout thing from high school time was visiting Mabel King during his community service commitment, which he did at the Motion Picture Country Home, a rest home and hospice care facility for anybody involved in show business. She was blind and dying at the time, but also so full of life—a kind of magical grandmother. After high school, Matty attended a Jesuit college where he played rugby on and off and also played bass in a punk band called Vietnun.

Once, he was held up at gunpoint and almost killed. Besides that, he studied literature and creative writing and it was great. For his Masters, he studied painting and critical theory. Matty’s girlfriend is also his best friend and she knows more about what is going on in his brain at any given time than anybody else but him. She's divine and a poet. They met through mutual friends and, after some difficult middle years, sorted things out. Matty loves that she'll fight like a hellion and forgive just as fast. They don’t have kids, but do have two cats—Patchen and Parsley (who thinks Matty is her mom—most nights he wakes up with her suckling on the two cherry blossom tattoos on his forearm). 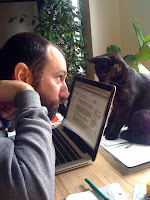 Matty always wanted to see Japan and he did in 2005 when the cherry blossoms were in bloom. During the trip, Matty ate apple pie and ice cream in a tiny house after seeing the Buddha statue in Kamakura. Another time, Matty was almost killed again when he was almost hit by a car going 100mph in the wrong direction during a high-speed chase. That combined with the Jesuit life principles of treating every day like it’s your last have made him a workaholic and somebody who tries to do absolutely everything right now. Now Matty does online marketing stuff. He owns and operates a network of websites. He still paints and has been working on a large-scale drawing installation that functions like a novel in pictures—with every single page on display at the same time. 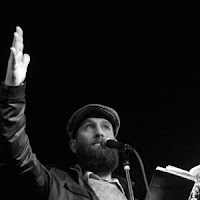 Matty is feeling pretty good about writing these days, even more so than painting, which is a big shift after mostly existing in the art world. He’s working on a novel that is built out of independent flash pieces. It's about a motorcycle gang and the apocalypse and Detroit and lots of birds that wear jackets and ponder their own evolution.
Posted by Michael Kimball at 9:36 AM No comments:

Fall for the Book

I'm excited to be reading from Us tonight at George Mason University's Fall for the Book with the wonderful Amelia Gray and Matt Bell. It's 8pm tonight in the Student Union Building, Rooms 3, 4, & 5.
Posted by Michael Kimball at 10:55 AM No comments:

A Weird Kind of Beauty

I interview Michael Bible about the weird beauty of Simple Machines, which is just out from Awesome Machine.

It's over at Htmlgiant.
Posted by Michael Kimball at 7:06 AM No comments:

What Are Some of the Best Books of the Year?

The wonderful Penina Roth answers the question at Flavorwire and places Us on the list -- along with books by Blake Butler, Deb Olin Unferth, Emma Straub, Joshua Cohen, Karen Russell, Seth Fried, Stefan Merrill Block, and Teju Cole.
Posted by Michael Kimball at 9:00 AM 1 comment:

Dear Philadelphia, I'm excited to be visiting on Wednesday -- looking forward to reading in the evening, 6:15pm @ Rosemont College. Many thanks for Randall Brown for the invitation.
Posted by Michael Kimball at 8:18 AM No comments:

I just posted the Fall 510 Schedule. It's pretty good.