It Was a Good Year

Here is my year in words, by the numbers.

44 publications in magazines and anthologies.
20 interviews of other writers.
16 readings.
12 readings by my pseudonym, Andy Devine.
11 screenings of films.
10 interviews of me.
2 translations: Dear Everybody in Korean, How Much of Us There Was in Spanish.
1 documentary, 60 Writers/60 Places.
1 paperback, Dear Everybody.
1 book under a pseudonym, Andy Devine's Words.
Posted by Michael Kimball at 10:35 AM 5 comments:

Labels: Andy Devine, Dear Everybody, How Much of Us There Was, Korean translation, Spanish translation, Words

After reading in two places at once on November 14th (Champaign and NYC), Andy Devine needed a little recovery time, but Being Andy Devine, the national book tour for WORDS, just passed through Austin, Texas for the Teleportal Readings, which was part of the Indie Lit Roadshow. Many thanks to the wonderful Jess Sauer for organizing, and, as always, to brilliant Andy Devine for being Andy Devine. Here is Andy's reading from Teleportal, which had to be recorded in a van outside the venue because of legal reasons.

Posted by Michael Kimball at 10:06 PM No comments:

The Baltimore wing of the National Indie Lit Roadshow is an open house thingy that is sponsored by Monumental People and Publishing Genius and JMWW and probably some other book people. It's running at 24 East Mount Vernon Place between 11 and 8. There will be great book shopping, drinky drinks, cash money poker, and a couple reading samplers (at 2pm and 7pm). I'll be reading something brand new as part of the 2pm sampler and then running the poker game. Click on the flyer for bigger details. 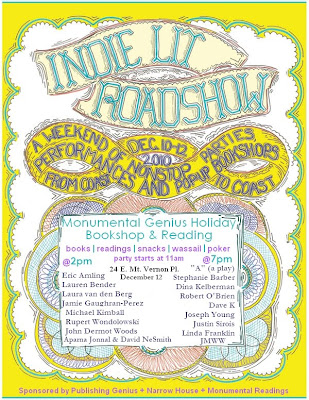 Posted by Michael Kimball at 10:36 AM No comments:

As I mentioned, below, Robert Kloss is doing a series of remixes at Necessary Fiction this month. Up today is the Andy Devine story, Plots, which is from WORDS, which Publishing Genius published earlier this year.
Posted by Michael Kimball at 10:38 AM No comments: 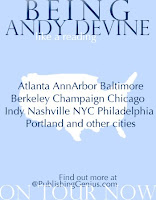 After reading in two places at once on November 14th (Champaign and NYC), Andy Devine needed a little recovery time, but Being Andy Devine, the national book tour for WORDS, continues in Portland on December 9th at the Smalldoggies Reading Series--along with Tom De Beauchamp, Jackie Treiber, Michael Roberts, and musical guest Antique Summer. Thanks to Matty Byloos and Carrie Seitzinger for organizing and hosting.
Posted by Michael Kimball at 10:17 AM No comments:

#141 The Great Abundance of Steve Katz

Steve Katz was born in the Bronx in 1935 and grew up in Washington Heights. It was a classic NYC childhood—playing ball, chewing Double Bubble, and hanging out in the park. When he was 9, Steve says that he took his sled to the park across the street and noticed everybody looking up into the sky at a bright lozenge of light. He says that he became transfixed by it too and was transported up into that lozenge of light. He says that that 9-year-old boy is still up there in the light (quite content that he never grew old) and that the Steve Katz who is talking to me is the alias Steve Katz, who has written some books and screenplays. After that, Steve attended Cornell University where he met his wife who was beautiful, the rodeo queen of Winnemucca, and a great sculptor. In 1957, he worked for the forestry service as a lookout with his wife, the result of which was their first child. They lived in Italy in the late 50’s and early 60’s with their 3 sons until Steve felt like he was losing his language. (Language is an imperfect medium for representing whatever you think of as reality.) The family moved back to the US and Steve took a teaching job at Cornell. They were married 14 years and Steve’s girlfriend, after the separation helped with the divorce papers. Steve never liked going to school, but taught creative writing and literature at a number of universities until he retired from the University of Colorado in 2003. What else? One great thing he was happy he did was buy a place in Cape Breton in 1971, which was gorgeous and peaceful; he lived there in a tee-pee for many years until he built a cabin in 1988. Also, Steve says that your body gets ridiculous as you get older, but its self-destruction puts you closer to your spirit. Further, Steve was one of the founders of Fiction Collective. And the books? Steve has written and published continuously since the self-published novella, THE LESTRIAD in 1962—including THE EXAGGGERATIONS OF PETER PRINCE (3 g's intentional), SAW, WIER & POUCE, SWANNY’S WAYS, ANTONELLO’S LION, and KISSSSSS: A MISCELLANY. The critic, Jerome Klinkowitz, says he “…pushed innovation farther than any of his contemporaries.” Steve currently lives in Denver, Colorado, where he is working on his MEMOIRRHOIDS (pain in the ass memories), of which there will be 137 (which physicists call god’s number, the fine structure constant, as it appears in all transactions between matter and light), which includes an unresolved decimal. 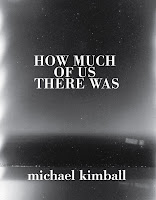 Robert Kloss is doing a series of remixes at Necessary Fiction this month. Up today is my story -- "The Birds, the Light, Eating Breakfast, Getting Dressed, and How I Tried to Make It More of a Morning for My Wife" (which originally appeared in Open City #20 and is actually an except from HOW MUCH OF US THERE WAS, which Tyrant Books is bringing out in the spring) -- and then Robert's remix, which removes the context to create a different tone. I remix one of his later this month.
Posted by Michael Kimball at 11:20 AM No comments:

Labels: How Much of Us There Was, Necessary Fiction, Robert Kloss
Newer Posts Older Posts Home
Subscribe to: Posts (Atom)