#29 David Kendall: What Surrounds Us 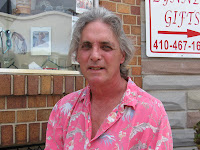 David Kendall grew up in Baltimore, left, and came back. From an early age, he wrote children’s stories for his brothers and sisters, which led to him being a painter and a poet as an adult. It was also as an adult that David first left his body, this after he was in a car accident. He didn’t want to feel the pain, so he floated up above the intersection. His floating body was outlined in white ink and he carried a briefcase. He still leaves his body when he is feeling at ease and secure, and sometimes he encounters his mother this way. In fact, it was his mother who introduced him to reincarnation and David was, among other people, a healer for the Czar’s family in the 18th century. He has also seen ghosts and a UFO with blue-skinned aliens. David knows things about the world that most people will never recognize.
Posted by Michael Kimball at 8:41 AM

Thank you for alerting us at Facebook to this life story. It is fascinating. It reminds us that we all have bits of intrigue in our backgrounds that, whether believed or not by others, are very real and true within our own sphere.

Thank you, Susan. I try my best to honor the details of each person's life--as they tell them to me.

I know David Kendall personally, and I am certain he has left his body a dozen times or more. We used to walk our dogs together in the park. I see him at Safeway now and then. He is a good painter. He is too nice to his dogs.