#1. The Life Story of Bart O'Reilly 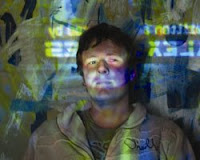 The Life Story of Bart O'Reilly

Bart O'Reilly was born in 1975 in Dublin, grew up among musicians, and always loved to draw. At 16, a chance encounter with an older artist led him to art school, which in turn led him to the US (though this was on a break from art school). He was working as an ice cream man on the boardwalk in Ocean City when he accidentally met the woman who would become his wife. Meaghan and Bart fell in love and she moved back to Dublin with him. Unfortunately, Meaghan did not like Ireland and Bart had to choose between his love and his country. He chose his love, the result of which is their 9-month-old son, Eoin, who is Bart’s personal culmination of his love for Meaghan and for Ireland.
Posted by Michael Kimball at 9:30 AM