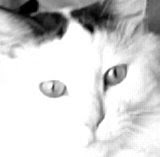 Moose’s father abandoned him before he was born. His mother took care of him for a few weeks, but then she abandoned him too. He wasn’t given a name for the longest the time. Moose was on his own, which he was fine with, but then he got sick. Then he didn’t feel like he could move anymore. Moose curled up under the bushes next to a house. Luckily, the man noticed him and made noises with his mouth. Moose opened his mouth and tried to meow, but he couldn’t make any noises come out. But that’s how the man knew he was sick. The man took little steps toward Moose and held his hand out to him. Moose was scared but too sick to move, so he let the man catch him. What could Moose do? The next thing Moose remembers is being inside a little cage and the outside moving by too fast. Then Moose remembers being inside a building for the first time in his life. The two people with long coats did things to Moose that he did not like – lifting his tail, putting their fingers in his ears, poking him with needles. Everybody but Moose was surprised by how small Moose was (2 lbs.) because he had such long fur, which everybody admired, and that made him look full-grown. The man took Moose away from the two people and Moose was grateful for that. Every morning for a week after that, the man made noises with his mouth and gave Moose tuna covered with pink sauce in a China dish. That made Moose feel good enough to run through the dry leaves in the bushes next to the house, which was really loud, but Moose was letting everybody know that it was his house. Moose got big enough to catch birds and squirrels. He broke their necks and tore their heads off. He ate nearly everything but the feathers and wings -- or nearly everything but the legs and fluffy tails. Sometimes, he saw his mom crossing the street, but then she was hit by a car and died. Now Moose throws up whenever he has to go anywhere in the car. Eventually, it got cold at night and the man made noises with his mouth and Moose followed him inside the house. Now Moose lives inside the house all the time and he runs up the front stairs and down the back stairs. He watches the birds and the rats from the 3 stories of windows. He could catch them—he could catch anything—if the man would just let him outside. 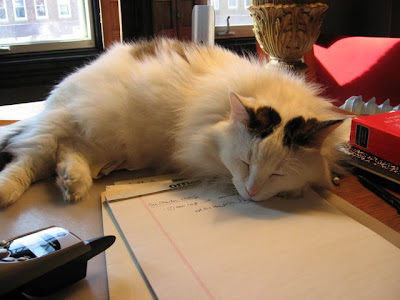 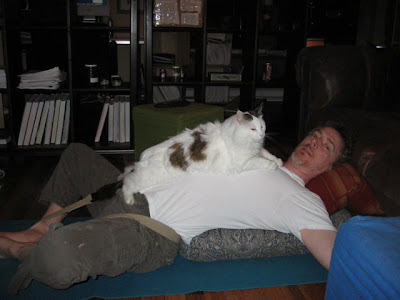 Posted by Michael Kimball at 8:42 AM

Moose! What a brave & beautiful kitty cat, who does yoga, too! Great life story, Michael, reminds us that there are great lives everywhere.

I love cats and your moose is awesome. I loved his life story! I have four cats and someday hope to have more and just be a crazy cat lady that everyone avoids.

Be well, and at peace, my friend.

I've read this one before, but had to come back and visit Moose one more time. :)

I love this Michael. It made me pause and think about my cat's life from his perspective.
A couple in Seattle found a small digital camera that they could put on their indoor-outdoor cat's collar and set a timer to take photos every 2 minutes. The resultant photos were so amazing to them that they staged a show in a gallery and sold loads of them. They had thought their cat was rather solitary but the photos made clear just how social and vibrant his life is and gave them a glimpse of his reality. I feel like you've done that for Moose, and helped me see how much what we think we know of people and things is based on our very limited perspective of them and their behavior and activities when in our presence. Thank you.

Thank you, Frith, for your wonderful and thoughtful note (Moose thanks you too). I love the bit about the little camera too. Any chance any of those photos are online somewhere?