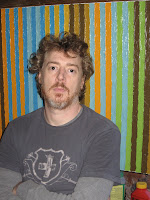 Michael Kimball was born two weeks late, during the Great Midwest Blizzard of 1967. His father was huge, weighing as much as 450 pounds, and could be very scary—he had fast hands and nobody ever knew when he would go into a rage. But Michael’s mother was incredibly giving, often doing without so that her three children could have clothes for school, shoes for the basketball team. The family didn't have much money, but Michael didn’t realize this until later. For a long time, he was the shortest, skinniest kid in class or on the basketball team. Sometimes he still feels this way, even though he’s 6'2'', 200 pounds. He hit .853 one year in little league, and holds the Meryl S. Colt Elementary School record for the 600-yard dash. But he gave up all other sports for running—was all-state cross-country in high school—until he had a stress fracture in his left foot and never competed again. After that, he didn't have anything he felt great at anymore. He floundered through his early years at Michigan State, changing majors, flunking classes. Then he started reading a lot and became serious about writing. He can't believe he grew up identifying as an athlete and that now he’s a novelist. Some people think he channels voices in his novels, which is unsettling because of his family history concerning spiritualism. His great-great-great uncle was a noted medium in the early 20th century, conducting popular readings and séances. A dead Irishman was his connection to the other side. Michael learned from his grandfather little ways to supposedly communicate with the other side—knocks, slips of paper one carries until an answer is received, that kind of thing. After college, Michael moved to Chicago and then New York to attend graduate school. It wasn't until he arrived in NYC that he felt he belonged somewhere. If he had stayed in the Midwest, he probably wouldn't have become a writer. He’d probably be a high school teacher and unhappy. Dropping out of NYU was just as important, because he’d realized he wanted to write fiction, not anything academic. The other great thing about NYU is that Michael met his wife there, Tita Chico, who is smart and beautiful and kind and supportive in all the right ways. They’ve been together over 15 years, and have four cats and no children, and they like it that way. Michael had a huge struggle with his second novel, How Much of Us There Was, and almost gave up writing. The same thing happened with his third novel, Dear Everybody, but he somehow reached a point where he stopped caring what anybody else thought about his writing and that released him to finish Dear Everybody and to write Friday, Saturday, Sunday, which he recently finished. He never would have started Michael Kimball Writes Your Life Story (on a postcard) without that feeling. Even though he loves Baltimore, he sometimes misses NYC. But he’s glad he left. He likes who he is now better than who he was then. He feels like he can do anything.


[Note #1: This postcard life story was written by Sam Ligon after he interviewed me as I have interviewed so many others for this project. Thanks, Sam.]

Michael can do anything! A wonderful telling of Michael's great life, Sam.

i want to hug michael

he has contributed so much to so many people

I love this life story!! One of my favorite parts: >>Some people think he channels voices in his novels, which is unsettling because of his family history concerning spiritualism.<< Thanks, Sam and Michael.

Wow, what a great life story! I also was intrigued by your family's history of spiritualism (and perhaps its subsequent influence in your writing) and your struggle writing how much of us there was. And also I'm intrigued about the size of your father's hands. Can you make an approximate tracing?

Great to see your own life story finally up here-- And Sam did a great job doing it in your style, too!

I love this project-- Seeing a new one of these pop up is always a pleasure.

Thanks, Karen. It really is unsettling.

Yes, Matt, many thanks to Sam. I appreciated being on the other side of the questions, gave me more perspective.

Great job Sam! Also, wonderful life story Michael and thanks for writing mine. It was fun and so accurate!

Terrific, terrific, both Michael and Sam :-) Thank you for everything you do!

Michael Kimball can totally do anything.

Amen to all that.