#154 Margaret Funkhouser Doesn't Have to Curate Herself 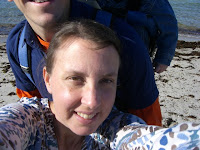 Margaret Funkhouser grew up year-round on Cape Cod. For fun, Margaret and her friends would climb on the roofs of giant summer houses. Sometimes, a window would be left open and they would spend hours inside someone else’s vacant home. Sometimes, it was dark outside. Margaret’s older brothers had left for college by the time she was in 6th grade, so she wore a lot of oversized, baggy shirts that they left behind and she read a lot of their old National Lampoon and Heavy Metal magazines, which were both scandalous and habit-forming. Around age 12, Margaret started doing a lot of community theater with a lot of Alcoholics Anonymous members (when she thinks of My Fair Lady, she thinks of coffee and cigarettes). In high school, Margaret wrote poetry and she took one poetry workshop in college (eventually, receiving an MFA in poetry from Washington University in 2002). By the age of 23, Margaret felt quite old (much older than she does now at 35). At the time, she was living and teaching at an all-girls private boarding school in rural Connecticut. Right before she was supposed to start her second year, she quit and moved to San Francisco so that she could know what it felt like to be young again. It worked, at least for a while. Three years later, Margaret moved back to Cape Cod for a while, which was the last time she did community theater. It was a kind of sanctuary hiding out in her hometown for a year. At some point, Margaret met Jason Stumpf on the fire escape at a party. She got to know him while writing an essay on the poet James Merrill for the rare books library where Jason worked. She fell in love with him because she doesn’t have to curate herself inwardly or outwardly when she is around him. Now, Margaret once again lives on the campus of a boarding school. She writes poems, studies vintage cookbooks, and raises her 1-year-old son—Jonas Funkhouser Stumpf—and takes care of her 10-year-old cat, Dashiell Hammett. She often jokes that when she pictures her son in the 1st grade, she pictures herself sitting in a desk right next to him. One day, Margaret would like wake up in the morning and feel well-rested. And at 60, she would like to be able to do a cartwheel, a good one.

I knew this same genuine Margaret Funkhauser years ago on Cape Cod; she had this wonderful eye that looked at the same world as everyone else, but saw different things. It is delightful to catch up, and delight in the paths she has chosen. It is wonderful to know she'll still be at those crazy cartwheels when her hair is gray.