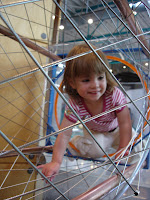 Kaya Larsen’s parents tried to get pregnant for 4 years before she was born (Boo died in the womb at 6 months), so part of Kaya’s Kayaness is that she was so wanted. They had dreamed of her for years. They picked Kaya’s name months before she was conceived (while paddling a kayak in the Prince William Sound). Kaya was born by unplanned C-section after her mom went through 15 hours of heroic, unmedicated labor. At some point before or during labor, Kaya was infected with Group B Strep (GBS), which caused fetal distress. After the delivery, Kaya was attached to a ventilator in the neonatal intensive care unit (NICU). The first 3 days of her life were pretty rough. The doctors and nurses didn’t know if she would live. The uncertainty was terrifying for her parents. Kaya was so fragile that any stimulation could throw her vitals off. It was agonizing for her parents to visit her and not be able to hold her. She wore little eyeshades and had cotton balls over her ears. Eventually, she began to move her hands and feet, her arms and legs. She opened her eyes, briefly. Kaya’s parents didn’t get to hold her until she was 13 days old. A few days later, Kaya was breathing on her own and making her first vocalizations—beautiful little gurgles and throaty cries. After 3 weeks, Kaya still needed to learn how to eat. For Kaya's 1-month birthday, her parents baked cupcakes for the NICU staff. After 5 weeks, Kaya began to eat consistently. 2 days later, Kaya went home. She was fussy leaving the hospital, but the moment they got outside she became quiet, awestruck that the world is so much bigger than a hospital room. At 3 months, Kaya laughed for the first time when her parents were tickling her and her squeals of delight morphed into a giggle. At 6 months, Dr. Perez pronounced Kaya too healthy for his high-risk clinic and said he never wanted to see her again. Kaya’s first word was either Bartleby (the dog) or Uh-oh. Kaya’s favorite toys are her pink blanket, anything she can knock over, and anything out of reach. She loves bananas (nana), raisins (ree-ree), and turtles (tuh-tul), and Bartleby (Bobby). She loves the stuffed turtle that Bartleby also loves and she loves books. She asks for a book as soon as her mom or dad comes into her room and she is partial to lift-the-flap books. She loves playing hide-and-seek, even though she isn’t very good at hiding or seeking. She thinks that all animals say, Moo. Now Kaya is 22 months old. For 21 of those months, she has been supremely happy and healthy (the only remnant from her being so sick is a little bird-shaped scar on her left hand, a pressure sore from all the tape holding down her tubes.). In fact, part of Kaya’s Kayaness is her supreme happiness. Another part of Kaya’s Kayaness is her unbelievable fearlessness (she’ll try nearly anything headfirst). In about 3 months, Kaya’s parents will bring home a brother or sister for Kaya and she will be a great big sister.
Posted by Michael Kimball at 8:47 AM

This was a great help today. Thanks. Even if it did consume my, "I'm a great big sap" allowance for the rest of the avant garde season.

A big AWWWWW from me. And a little bit of jealousy over a bird-shaped scar.

Awesome. :-) thanks so much, Michael!

Jamie, I'm glad it helped. It helped me too. All you have to do now is just think about it when you need it.

Leslie, We will always have the Spongebob pillow.

Erin, It's a beautiful family you have.

Michael - You've captured Kaya's essence and the miracle of her being so beautifully! Having amazing Erin and terrific Jeff as her parents make her supremely blessed, although I may be prejudiced! Thank you.