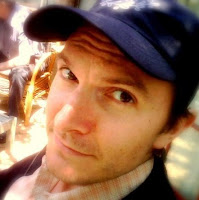 Shya Scanlon was born on July 29, 1975 in Augusta, Maine, and spent the first ten years of his life on a rural commune. This was the happiest time of his life: sheltered, idyllic, with nothing but fond memories. When he was ten, his family moved to Seattle, which was surreal and shocking, and he wasn’t prepared for the reality; he felt betrayed, and began to take it out on his brother Colin, these acts becoming his biggest regret. He was always very physical, until a mountain bike accident at 15, when he suffered a concussion and tests found a birth defect in his vertebrae. Surgery failed to correct the problem, and he wore a neck brace. He became more bookish, falling into an alternative crowd and writing, reading, doing drugs and smoking, petty crime: leading to a path of self-destruction. He felt above-the-law and kept spiraling. He dropped out of high school at the beginning of junior year, and when his parents were away on vacation, he broke into their car and drove to San Francisco, bought drugs, then drove to Rhode Island to sell them and make enough to fix the car, the excursion landing him in a juvenile detention center in Wisconsin. His parents’ response was a wake up call—Shya wasn’t in trouble, and he realized the impact he had on people he cared about, especially his brother, and he wanted to turn himself around. He eventually attended an alternative school, which provided him with the kind of opportunity he needed. He attended college in Indiana, but felt isolated and moved back to Seattle, where he studied German. He spent six months in Germany, but felt depressed and isolated, so eventually went back to Indiana and finished his degree at Earlham College. He picked up writing to be part of a girlfriend’s world, mostly poetry. At the end of college, he moved back to Seattle, stopped writing, then quit his job to write a book. He decided to move to New York, which meant for him a commitment to writing. He applied to Brown, lived in NY for a while, then met his girlfriend, Erin, who worked for Jane magazine. He was accepted to Brown, moved to Providence, and when Jane folded, Erin moved to Providence with him. He couldn’t deny the truth: her “amazing force of good,” her joy, and the vitality in everything she does. He lives with her now, and in NY again, where he writes and does freelance editing. He’s most proud of his decision to reorient his life path, and of his book Forecast, and hopes to someday make a living from his writing.

[Note: You can read Kim Chinquee's postcard life story here.]
Posted by Michael Kimball at 9:28 AM