#112 The Difficulties of Being Giancarlo DiTrapano 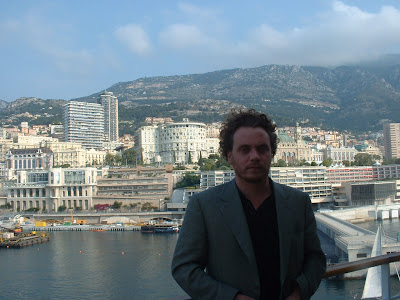 Giancarlo DiTrapano (Gian to his friends) was born in West Virginia, which is beautiful and where there is lots of drinking and lots of drug-taking and underage sex, where there are lots of mountains and rivers and the music is usually classic rock and roll--Van Halen, AC/DC, Cheap Trick, which is also beautiful. When Gian was little, he was stung in the eye by a wasp. When Gian was 9, his older brother, Lidano, died in a car crash when a couple out for prom night pulled onto the highway and hit the car Gian’s brother was in, which then struck a utility pole at 60 mph. Everybody except for one passenger died. Gian’s brother was the first person close to Gian who died and it started a chain of deaths throughout his young life that he thought would never end. Luckily, Gian had his sister, Lia, who he loves more than anybody in the world. Plus, his parents are miracles. And, fortunately, after a while, people stopped dying so much. Gian moved to New Orleans for college and studied philosophy there, mostly because his cousin Meredith did. At some point, Gian moved to Rome and learned how to speak Italian in Sezze. At another point, Gian moved to New York City. After this, he broke up with his girlfriend of 10 years, which was difficult, but he had fallen in love with something else. Another difficult time was Gian’s other older brother, Dante, going to prison. Also difficult, Gian suffers from cluster headaches that can last for a month. Once, Gian saw somebody on a TV show, walked to his computer, googled the person, emailed the person, and then walked out of his apartment. A few hours later, the person had emailed Gian back. They met for a drink and have been dating ever since. Now Gian works as a bartender and as the publisher of New York Tyrant. The rest of his life, Gian would like to get to the end of it without too much more suffering and pain.

your ability to stay objective and neutral make these stories great.

Awesome! I loved the Guardian piece, too.

Thanks, Jereme. I try to give back what each person gives me.

And thanks, Ellen. Yes. And yes.