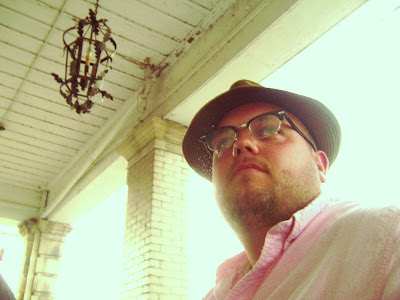 Nate Jackson was born in Mishawaka, Indiana on January 17th, 1981 (less than 24 hours after his wife was born). School bored Nate and he was often sent to the principal's office. In 5th grade, he got caught hiding under his teacher’s desk, which resulted in him spending a week’s worth of recesses under the principal’s desk. Disliking school led to poor grades, which led school counselors to think him simple-minded, which led to 3 days of intense scrutiny and testing by a child psychologist, which led to the discovery that Nate could perform at an 11th-grade level. That was when he was in 7th grade, the same year Nate’s parents got divorced and he lashed out even more in school. He was always a kid who loved to blow things up. Nate skipped 8th grade and was sent to a yeshiva in Chicago. He would never live with his parents again, only seeing them for brief summer visits and school vacations. But Nate hated living in a dorm and 9th grade was a disaster. After a couple suspensions, he was asked to not return and went to live in Cleveland with his uncle. He attended a smaller yeshiva where he could get more personal attention, but, after a year, his uncle moved away. Nate lived his last two years of high school with the Falk family, where Mr. Falk taught him how to play guitar, which Nate learned, along with how to write songs. It became his art. After high school, Nate moved to Israel to study at a rabbinical college, but quit after 1 ½ years, and became a sniper for the Israeli army. Of course, given previous discipline problems, Nate hated the army. He stopped being religious based on his newly-heightened self-awareness. After he got out of the army, he denounced violence and became a peace protester in the West Bank and Gaza. After a year of that, Nate returned to the US to attend Indiana University. His last semester at IU, Nate met his future wife, Micah Ling, and, after a few months of her asking him for a ride on his motorcycle, he said yes. It's been love ever since. Last year, they moved to Nashville so Nate could play music, but they missed the easy Indiana life and moved back to Bloomington. As an adult, Nate has grown close to his parents again and he loves them dearly. He also loves his life so far. Nate still plays music every single day, usually after he wakes up—because his voice is raw and his fingers are calm. His time with Micah and their bashful dog Bourbon has sugarcoated his sour memories and rounded his rough edges. They've been together for 4 years and got married on October 5th in a park near their house. Nate loves Micah more than anything and he will live every adventure with her for the rest of his life. 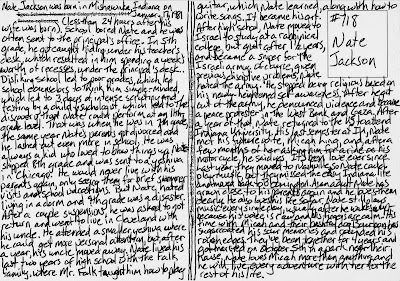 Posted by Michael Kimball at 8:45 AM

Yea, Nate!! That's our son-in-law and we love him and love saying that. --- Deborah Ling

I just love the visual of spending recess under the principal's desk.

Hey Deborah, I also love the lineage that brings us to Nate's story: Peter Cole, which led to Micah Ling, which led to Deborah Ling (which led to Phil Adams) and Nate Jackson.

Hi Leslie, The under the desk, I think we all identify with that, whether we were there or not.

YO Nate it's shimmy from that year and half in Rabbinical Seminary. I'd love to get back in touch with you but obviously I don't want my email posted here. If you use facebook this is my profile
http://www.facebook.com/people/Shimmy-Rosenblum/614230466
If you don't use it think of something else