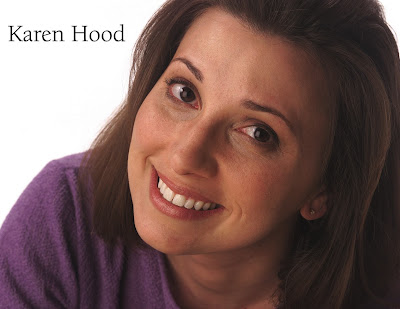 Karen Hood’s family moved eight different times while she was growing up and she thought her family was destitute. Everybody else’s house seemed bigger than hers until they moved from New Jersey to Michigan. Karen brought her big hair and bright-colored clothes with her and the other kids at Waverly High School thought she was a rich kid. Karen used her beautiful voice to sing in the school choirs and to be a cheerleader. She has always liked the idea of helping other people to do better. After high school, Karen went to the University of Tennessee and majored in journalism. She started acting in TV commercials and do voiceover work on the radio. After college, she drove the Oscar Meyer Weinermobile around the country for a year. She was in lots of parades and tried to get in traffic jams (so they would mention her vehicle on the traffic reports). Karen had a series of jobs in marketing and public relations, but mostly stayed in Tennessee—in part because of the many early moves, but also because her mother was diagnosed with cancer and she wanted to spend as much time with her as she could. Her mother struggled with cancer for almost five years before passing away. After this, Karen hung onto other relationships to the very end. She was afraid of losing everybody. Years later, Karen struggled with her own difficult illness and she wished that her mother could have taken care of her (Karen’s mother was her cheerleader). Still, Karen found great comfort in the forty different friends who took turns staying with her for weeks after her surgery. Coming through all of this, Karen found a new kind of confidence and became her own cheerleader. Now she is finishing her Ph.D in marketing and will be moving to wherever her first academic job takes her. Everybody is cheering for this job to be wherever Karen wants it to be.

[Note: Karen and I went to high school together. It was great to get to know her again 23 years after we graduated.]
Posted by Michael Kimball at 3:15 PM