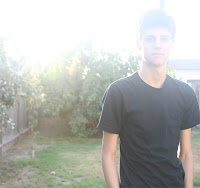 Ken Baumann’s mother was diagnosed with cancer and given 3 weeks to live before he ever existed. Luckily, his mother recovered and Ken was born some time after that, though extremely prematurely. Ken was supposed to be dead and blind, and he does have horrible vision, but his hearing is intact. For all these reasons, Ken was a miracle baby. For many other reasons, Ken’s parents have always known he is special. Ken had a great childhood growing up in Abilene, Texas, but didn’t play football. He was always skinny and read a lot, mostly fantasy books. When he was 10, wrote a book about a boy wizard who is recruited to a wizardry school so he can fight the evil wizard (Ken was incredibly pissed when Harry Potter came out). When he was 15, Ken wrote his first full-length novel and it felt like a huge accomplishment to finish something so large. Through these years, Ken continued to read and write fantasy books—until he read Kurt Vonnegut’s Cat's Cradle, which changed the way he thought and read for good. Ken’s acting career began after he was discovered at a Model/Actor Search and later was signed by a talent agent in NYC, where he moved for 3 months. After that, Ken was set up with another agent in Dallas and started auditioning for commercials and modeling for area department stores. But it wasn't until Ken played Nick in A Thousand Clowns at a local theatre that he felt passionate about acting. He gave up the modeling thing and went to Los Angeles for pilot season. The second year he went for pilot season he booked the lead in a pilot for Fox called Don't Ask, and he has been working ever since. Even though he was just 14, Ken wanted to take care of the family and find enough work to convince his dad to move out with his mom and his little sister. Ken wanted the family together and thought it was his responsibility. Recently though, Ken realized that his parents are incredible and smart and ten times more capable to withstand life's difficulties than he is. He loves how supportive they have always been. There was never any stage mom or stage dad from them and they never put any expectations on him. Ken met his girlfriend while working on a film called Spring Break '83. He felt the most joy, the most innocence, in the 6 weeks that they were together on set. She is an intelligent, generous, talented, loving person—and he loves her purely. She has inspired him to do so much. His second novel, Interim, and the feature film that he’s working on now are both dedicated to her. Last year, Ken started work on The Secret Life of the American Teenager, bought a house, and is now living by himself. Ken feels powerful and alive, and Ken is.

More Ken Baumann
Posted by Michael Kimball at 8:30 AM

I am glad that you are doing this kind of thing. It's nice to know something about people like Ken Baumann (or anybody for that matter). I wish I could get to know everybody.

Thanks, Janey. I wish that I could get to know everybody too.