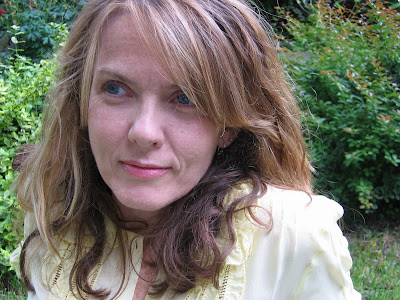 Elizabeth Crane was born in 1961 to a professor and an opera singer. She was a social and rambunctious child. The small family lived together until she was 6 years old and Elizabeth’s parents split up, which was disorienting (and at least part of the reason that Elizabeth didn’t marry until 34 years later). Elizabeth moved with her mother to New York City, which was overwhelming (the buildings too big, too physical, so dense). Elizabeth’s mother sang in operas that took them all over the US and Europe and Elizabeth sang opera too—until 5th grade, when she started writing fiction. She spent half of the summer in Iowa with her father’s new family. The rest of the year Elizabeth and her father wrote letters to each other, which Elizabeth loved. In 7th grade, she wrote a novella (based her half-sister as a creature that lived under the table). For college, she went to George Washington in DC, in an attempt to escape New York City. She kept writing, but didn’t learn anything from her writing teachers, which was a disappointment. After college, she moved back to New York City, which kind of sucked for another 10 years. She was trying to be creative and pay the rent and please her parents, and, well, you know. She had lots of different jobs, but didn’t like any of them. It was during this time that Elizabeth’s father bought Elizabeth her first computer, because he thought that any serious writer should have one. She kept writing, but it wasn’t until she read David Foster Wallace that Elizabeth realized that she could write like herself (instead of, say, Jane Austen). That’s when everything changed. She moved to Chicago even though she didn’t have a job, but finally felt like she belonged somewhere (so open, so beautiful, the lake). Her mother got cancer, which was terrible, but Elizabeth also realized that she needed to reconcile with her mother. Elizabeth tried to make amends for not being a good enough daughter, even though she was. Once, while she was talking, trying to explain, her mother fell asleep. When her mother died, Elizabeth realized that she needed to get on with her life. She took a year off from work and finished a novel that she had been working on for years. Her agent couldn’t place it, but, in the meantime, Elizabeth had been writing short stories. There was a mini-bidding war for the collection and Elizabeth burst out laughing when her agent told her the amount of the advance. Things have been pretty good ever since. She’s published three wonderful collections of short stories. She has a great husband who she met through friends (though she didn’t realize they were dating for the first two weeks of their relationship, not until he brought her flowers). And she has a dog named Percival Fontaine Barksdale, which—how great is that? Yeah, it’s pretty great.

Buy one of Elizabeth Crane’s books
Posted by Michael Kimball at 8:43 AM

Labels: Elizabeth Crane, Percival Fontaine Barksdale, You Must Be This Happy to Enter