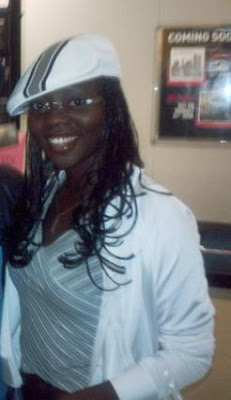 Rachel Joy was born in Uganda during a civil war, the youngest of six. Her father was a priest, her mother a nurse. When Rachel was 28 days old, her mother crossed the border to Kenya with all 6 kids. She is Rachel’s hero and her inspiration. At 3, Rachel’s father got a job in Sweden and the family followed him there. Rachel was a loner as a child. She started a year early because she was so smart. In 5th grade, Rachel started getting sick all the time—migraines, stomachaches, other various ailments. She would go home after school to read and write, so she didn’t have many friends. She devoured every book in the house, and then started on the books in the library. When Rachel reads, she forgets about the world around. When she was a child, her mother would punish Rachel’s siblings by forcing them to read and punish Rachel by forcing her to watch television—seriously. Rachel played the piano and wrote songs and poetry and stories. At 15, she went to a music school, but dropped out. Around this time, she started wearing suits and got the nickname Evil because she rarely smiled. Her body was in a state of uproar, but nobody could figure out what was wrong with her. Rachel finished high school and started university where she studied communication in English, international migration and ethnic relations, and peace and conflict resolution. She loved her freedom at university, but, after her third year, she decided she was done with Sweden, and applied for the University of Bradford (at the time, the only university in the world with an MA in conflict resolution). Warfare fascinates her, but coming from a war torn country has left Rachel with the desire to build up her native country—and maybe save the world. After her MA, she moved around a bit. In 2005, she was staying with her father when she found him dead in his bed. The worst part of dealing with her father’s death was that everybody wanted her to tell the story of finding him. The only time her father ever said that he was proud of her was when he read her dissertation. After that she moved around a lot again. Rachel will do anything on a dare, but she has trouble trusting people and lives a rather lonely life. She doesn’t feel alone, though, or that there’s anything wrong with it. She would like to have a family some day, but the thought of having people around constantly unnerves her. Rachel writes music and poetry that nobody will ever hear or read, which helps to keep her emotions in check. She is in love with words, reading them or writing them. And now she works as a consultant for GE Healthcare, which is ironic since she still suffers from an unidentified illnesss. 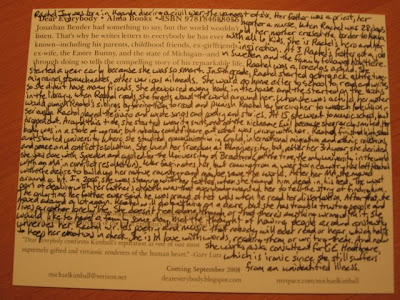 R. Is For Reading

Hey Josh Ritter
Posted by Michael Kimball at 9:04 AM

I love Rachel Joy's life story. I'm proud of her too.

Thanks, Anon. I think we all are.

Hey Michael,
I am still saying thank you for doing this; and still loving it. Now I need to try and figure out if I know who commented above. Somebody's proud of me... Mother, is that you?