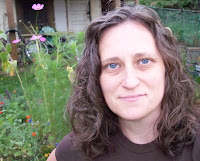 Sherrie Flick was born without a fully-formed hip socket and had to wear a brace the first two years of her life, during which she cried every single day. She insisted on having a pacifier in each hand and one in her mouth. Sherrie grew up in a Pennsylvania mill town and had an Americana kind of childhood. There was a penny candy store within walking distance of her house. In high school, she was a cheerleader and dated the captain of the football team her freshman year. She was also a good student, editor of the yearbook, and into new wave music—so by her junior year, her group of friends was called the Scoobs (after Scooby-Doo) and they were tormented endlessly. It was difficult to be different in any way. After high school, Sherrie bolted for UNH, because she wanted to be a poet and she thought all poets were from New England. During her college years, she worked in a bakery and started writing short-short fiction. After that, she traveled through Europe with her then-lover. Then she moved to San Francisco with her then-boyfriend. Things start overlapping here. Actually, Sherrie had a string of non-stop, overlapping boyfriends from age 14-26. She had a complicated relationship theory at the time, but can't remember what it is now. When she thinks about it, she envisions a lot of spinning plates. During this time, Sherrie would work until she saved enough money to travel. It was a pretty regular cycle. She kept on writing and traveling and baking and living the slightly unreal life of a 20-something until she felt like her life was about to float off into oblivion. Then she applied to grad schools. The University of Nebraska gave her funding, so off she went, site unseen. It was great for her writing, even if it felt like a nervous breakdown, which it actually was after a man there broke her heart. Nobody had broken up with her before and she went on a 9-month binge of serious interior thought, pool playing (8 ball), Jack Daniels, fiction writing, and gender studies. After that, there was a new guy in her fiction workshop, Rick Schweikert. They met in August, moved in together in December, were married two years later, and have been together for 11 years. He was the answer to everything, every single question. They moved to Pittsburgh, an hour from where she grew up, and where Sherrie now cobbles together a living writing/editing/teaching. Along the way, Sherrie published many stories in literary journals, and, in 2009, she will publish her her first novel, Reconsidering Happiness. Sherrie is still super into baking and Rick is super into eating. They have a big garden, which Sherrie embraced with her first real long-term relationship. The two go together for her. Pesto equals commitment. Fresh garlic equals devotion. Sherrie and Rick feel lucky in the life they have together.

I never read an author until I know her true feelings about garlic.
Superb biography!
I believe I love this woman.
Clicking over to buy her book now.