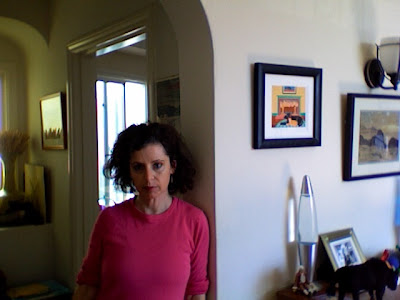 Meg Pokrass was born near Philadelphia and her parents’ marriage was so volatile that Meg’s mother and father divorced when she was just 5 years old. It was a traumatic time and Meg just remembers scraps—like Polaroids called sad dad and mad dad and hiding. The memories are cut off from movement. But Meg’s mother drove Meg and her two teenage sisters 3,000+ miles away from her father and their entire extended family and they started a new life in Santa Barbara California. Her mother became a realtor and raised Meg and her sisters alone. They didn’t have much money and moved from rental to rental. Meg went to four different elementary schools growing up. In the 1970s, one of Meg’s sisters, Sian Barbara Allen, became a beloved actress. Sian was like a mother to Meg (being 14 years older) and she was also a great teacher. Meg studied acting with Sian while also performing in local theater (first time was age 8). One of the things she learned was how to live truthfully under imaginary circumstances. In the mid-1980s, Meg moved to New York City and performed in theater there until her mid-20s. It was during this time when she also started writing poetry, which she did for 16 years, before discovering flash fiction, which is now her passion. Meg loves writing and editing and she is one of the editors for SmokeLong Quarterly. She also has a prompt blog and enjoys coming up with prompt ideas (which goes back to her acting days and using sensory recall). She finds the kernel of a character in what the character needs or wants. It was in New York City that Meg met her husband, who is funny and smart as hell. She loves that about him, and his great empathy, and the fact that he loves that Meg is a kook. Their 12-year-old daughter is a true non-conformist too, and is already a published writer. 6 years ago, Meg contracted a rare pain condition—chronic regional pain syndrome—in her right foot and couldn't really walk for 3 years, which changed her way of being. About a year ago, she fully recovered and, after that, the conditional deep depression eased up. Meg began writing seriously (writing had been in the background of her life before) and found Zoetrope, a community that has helped her tremendously. After being in theater, the communal aspect of creating is huge for Meg. And getting through all that pain has made Meg far more driven to express herself (she’s published 100+ stories and poems) and a lot of her inhibitions went away. She stopped worrying about failure and started writing in a way that felt freeing. Also, Meg has 7 animals—a dog, 3 cats, 2 rats, and a bearded dragon lizard—and they all live happily together in San Francisco.

Posted by Michael Kimball at 10:26 AM

How great that art and a love of living come out of all this. Great, too, to have a chance to watch and hear her read.

If you haven't read any of Meg's work, you must find time to do so. She is like a sculpter, carving and molding her work until the very essence of story emerges; until the work is what it wants to be. No more, no less.

I loved learning all of this about Meg. And Meg, you look gorgeous and read beautifully in the video.

She's so charming...and such a good writer! Thanks for this.
--Corey

a remarkable post, thank you for sharing. some of it reads like fiction, which goes to show ... and the reading is beautifully rendered - great story and your poetic roots show. you did express yourself!

Meg's big heart comes through every sentence she writes. She most certainly "lives truthfully through imaginary circumstances" in the lyrical stories she makes

I loved hearing all of this too. Beautifully written. Thanks!