#149 Christopher Bowles: Getting On With It 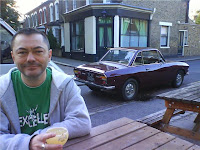 Christopher Bowles’ biological mother and father had an affair in 1964 (she was single; he was married; he told her to have an abortion and they never saw each other again; years later, Christopher found and became friends with both of them). That was how Christopher Douglas Bowles was born with the name Christopher Sean Snoad. Christopher’s adoptive parents kept the name Christopher because his adopted father’s life had been saved by a guy named Christopher during WWII. Christopher was born just west of London, a place called Isleworth, and then the family lived in Richmond. When Christopher was 4, his adoptive father died. For days after, all sorts of different women looked after Christopher, taking him to the zoo or the movies or anywhere. One afternoon, Christopher arrived home from one of these outings to a kind of party and found out it was his father’s funeral. After that, Christopher and his mother moved to a village on the outskirts of Cheltenham in Gloucestershire to find work and a place to live. When Christopher was 16, his mother died, which was awful; she'd been sick for a long time and Christopher went a little off the rails. After that, his stepfather (who Christopher acquired when he was 8), kicked him out of the house so he could sell up and move to Essex to marry some woman he'd known before he knew Christopher’s mother. The day after Christopher’s 18th birthday, he packed a bag, walked out of his life in Gloucestershire, and climbed on a coach. Eventually, he arrived in London in the summer of 1983 with 40 pence in his pocket. He slept rough for a week or so, then found some friends who let him sleep on their floor. Eventually, he got a bedsit in East Sheen, which was just a ½ mile from Richmond, where he'd left at 4. He got a job in a record shop and then a boyfriend. They moved to and around East London for years. In 1993, Christopher went to University, where he studied communication and visual theory, though he wishes he’d studied English literature. In 1998, with no job, and no home, Christopher split from his boyfriend and went to stay in a friend’s spare room in Kensington, a brief stay that turned into 5 years. He worked at an art gallery and, eventually, bought a house with the ex-boyfriend, but only as friends this time. Last year, the art gallery sacked him based on a false accusation of theft, which was pretty devastating, especially since it wasn’t true. At 43, Christopher is a single, gay man, with no steady job. He feels he should be more uncertain or depressed about his future, but he isn’t. Christopher is going to start all over again and get on with it.

[UPDATE: Christopher is now working for the local government and the last year has taught him the importance of real friendships and how a person can overcome so much with the love and support of true friends. Also, having his postcard life story written inspired Christopher to start writing again, after a very long gap, which you can see at Bowlesy Online.] 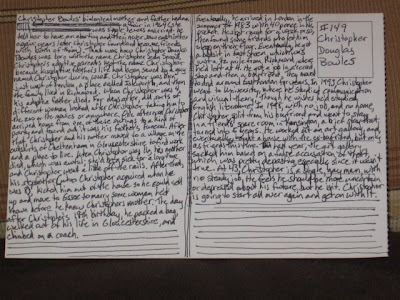 Posted by Michael Kimball at 9:46 AM

Labels: Bowlesy, Christopher Bowles, getting on with it, WWII

congrats to christopher on the happiness despite it all (and the new job :)

Hey Jessie,
Thank you for that, much appreciated :-)
All the best,
Christopher