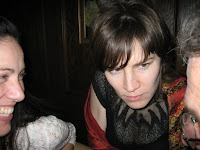 Stacy Muszynski was born 3 months early when her family was camping. This involved state troopers, some illegal things on the highway, and a bunch of brothers and sisters who still insist Stacy ruined their vacation. Stacy was called the miracle baby, which was too much and probably led to her sense of perfectionism and responsibility. Stacy’s childhood was a mixed bag. One brother fed her with an eye dropper. Another brother once gave her a running start as he packed a rock inside an icy snowball. When she thinks about the whole family together, though, it’s the living room’s flickering TV light, bodies sprawled every which way, everybody laughing. When she was 8, Stacy started playing soccer, the beautiful game, because her friend Chrissy was going to play (they’re still friends), and she learned to play each position. When Stacy was 9, her mother died unexpectedly. Stacy listened to her father cry himself to sleep at night (that was maybe the hardest thing ever, but good too, the way it demonstrated the power of love, the depth of sorrow). After that, Stacy found other mothers to take care of her, to learn from, to hug. She tried to be a good kid. Her mother's death keeps her close to tears and compassionate, a fragile gift. Years passed. Stacy went to college, kept playing soccer, had a bunch of different majors, graduated. After college, Stacy kept playing soccer—loving the beauty in the work among players: weave, give-and-go, overlap, everything in motion and open space, everything angles. Stacy has always loved chip shots, bananas, diving headers. She has always loved the smell of the grass in every season, the crunch of it after a freeze. There was the way Coach yelled at her from the sideline. There was how, when she struck the ball with the sweet spot of her instep, everything aligned and she realized a choir had started singing. Over the years, Stacy also tore some ligaments, acquired bad knees, and injured her back in a way that doctors could not quite explain. Soccer, it’s tough, and now it’s been 8 years and 4 months since she last played (as of 01/09). Another thing to know about Stacy is that she is incredibly inquisitive, which is one of the ways that she shows her intense desire for intellectual discovery and emotional connection. That is, if Stacy meets you, she will consider you her friend, and you will be. Further, she will keep writing one good sentence and then another good sentence until she has something important to publish. Also, now, Stacy has a permanent boyfriend, her husband, Vincent Cavasin, whose name she loves, along with his undying patience, his capacity for fun, his lack of sports knowledge, and his baby-butt-smooth skin. They met online @ Lavalife, and he was persistent, which was a good thing. Their as-yet-unborn kids will learn logic and high-level math from Vince and eye-foot-hand coordination and ball control from Stacy.

[Update: Stacy is now the web editor of American Short Fiction and its blog, so submit.] 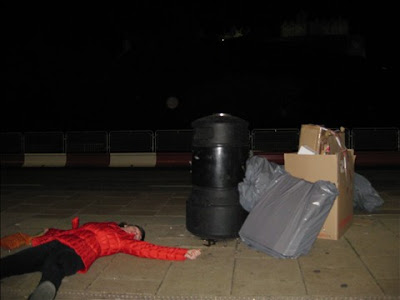 Posted by Michael Kimball at 7:28 AM