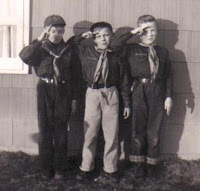 Monte Riek was born in Montana in 1943. He had a normal childhood. There was no TV, so he concentrated on being a kid—playing with his dogs, roaming the hills, going swimming down at the river. At 7, he was introduced to nuns, which was terrifying. At 11, hunting with his dad, Monte shot the antelope that went down but didn’t die. Monte always remembered the terror in its eyes. His dad was proud, but Monte cried the rest of the day. At 12, Monte, an altar boy, threw up during mass—on the priest, on the altar—and thought he was going to Hell for it. In 1956, Monte’s family moved to Billings and Monte was awed by the big city. In 1959, Monte got drunk for the first time. It was down by the river and he kissed a couple of girls. It was euphoric. He wanted to feel that way again. By junior year, he was drinking nearly every weekend. That summer, his parents divorced—his mom going south, his dad and sister north. Monte stayed by himself in Billings to finish high school.

In 1962, Monte graduated from high school and got a job working construction. He worked all day and drank all night. It was awesome. It was his idea of being a man. The next fall, he went to college, majored in drinking, and stopped going to classes. He started working construction again, saved up, then went to Mexico to drink it all. Back in Billings, he asked his dad for money for college and drank it up too. At 21, he could finally go into bars, which was fascinating. One night, he drunk drove his car into a house; then he borrowed a friend’s car and drunk drove it into the police chief’s car. Monte fled to Las Vegas and hid out at his Mom’s house, then Oregon for a dam construction job. Eventually, it was safe enough to go back to Billings, where he worked all day and drank all night. Monte met Burt (Elberta) on a blind date. She didn’t drink, but Monte was willing to overlook that. He asked her to marry him, but she didn’t answer. He asked Burt again and again she didn’t answer. In 1966, Monte got a job in Seattle at Boeing. Burt wrote him every day; Monte drank and wrote back every night. One day, she wrote him that she was marrying somebody else. Monte quit Boeing and moved to Canada, where the Canadian government drafted him to fight forest fires. After that, Monte moved back to Seattle and met Judy, who could match him drink for drink and did the same drugs too. They fought when they were drunk. Monte asked Judy to marry him. She said, Yes. Then they had a big fight and Monte stayed away for days. On his way to see her, he crashed and was taken to jail for a DWI. He called Judy from jail, but she had already left for CA with an old boyfriend. In 1972, started his 20 years of working at a steel factory. Half the workers were addicts, the other half alcoholics. Monte took speed so he could drink more. He became a molder, got a raise, and bought a house. He met Diane, whose kids started calling him Daddy, but she eventually made him choose—Diane or drinking. Alcohol was Monte’s true love. In 1974, Monte picked Johanna (Jo), a Golden Retriever, out of a litter of seven because he liked her mother.

Jo kept Monte out of bars some, but Monte drank anywhere and everywhere by this time. He got pulled over all over Seattle. Sometimes he got a DWI. Sometime his lawyer got him off. In 1976, Monte spent the summer in jail, which wasn’t so bad—and he could get any drug there, which is where he discovered cocaine, which became his drug of choice for the next 18 years. In 1979, he started judge-ordered treatment. His sobriety lasted 3 months. After this, Monte got rid of his car because he liked alcohol better than his driver’s license. He got rides to work with his roommates who all worked with him. Monte’s house had turned into a crash pad for wayward husbands. He always shared his house, his booze, his drugs—as long as they were good to Jo. Monte adored his two nieces, Cass and Terri, they never new that he was always wasted until they were older. 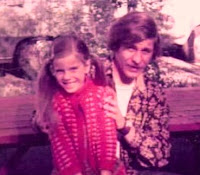 They just thought he was really funny and an amazing superstar. He was a cheerful and loving drunk and addict. In 1980, Monte started taking Antabuse to stop drinking, but starting doing more drugs, especially cocaine, which introduced him to lots of criminals. Around this time, Monte met Jerry, who had easy access to cocaine and became his partner in crime for 10 years. Soon, Monte stopped snorting cocaine and started smoking crack. He got heavy into the drug trade buying and selling, which was how he met Nettie at a crack house. He knew she was his kind of woman when she put in a pinch of Copenhagen (she also hated nuns). In 1988, Jo died in Monte’s arms, at the vet. She had been his constant companion for over 14 years. Monte’s health got bad—his kidneys, high blood pressure, signs of impotency. One night, Monte became confused and disoriented; he ran into a wall, had no coordination. Monte had had a stroke, but kept drinking through it. At the hospital, after the doctors told him he would live, all he wanted was a beer. He was drinking 30 minutes after he was released from the hospital. After that, Monte went back on Antabuse and went back to work. 3 months later, he had another stroke, but kept doing crack for 3 days before going to the hospital. The first night out of the hospital, he went to a bar and then got in a fistfight over a drug deal. By 1992, Monte couldn’t work anymore and retired, which gave him more time for alcohol and drugs. Monte sold his house as is—with the idea of moving back to Billings and living off the money, but smoked the money instead. In 1993, Monte went back to Billings the same way he left 27 years before, drunk. He moved in with his wonderful sister, Connie, and also spent lots of time at his father’s house; he was a drunk too. In 1994, Monte received 2 years of Social Security back pay and went back to Seattle to do crack. He thought of himself as a good junkie and he smoked until he didn’t have any money left. His nose bled all the way back to Billings. Monte got a little house there and made the Rainbow Bar his second home. He told people that he came back to Billings to die. It got him lots of free drinks. Monte decided to drink himself to death. Everyday, he would sit and drink until he shit his pants. On the way home, he would throw up in front of place where they had AA meetings. He wanted to get sober, but not drinking scared him. It’s what he had been doing the last 37 years. On August 1, 1995, Monte entered a treatment facility sober. Weeks after he got out, he started going to AA meetings and was surprised at how good it felt to share his life story. In 1997, Monte was diagnosed with throat cancer, had to give up smoking too, and had to have surgery, after which he was never able to speak again. He carried little spiral notebooks in his shirt pocket and wrote his conversations. He went to AA every day, which saved his life, and spent more time with a new generation of nieces and nephews, which he loved doing. Monte died in 2009—from complications from cancer. He was clean and sober the last 5078 days of his life. He gave out Lifesavers to every kid he met and dog treats to every dog he met. He was stubborn and funny to the end. 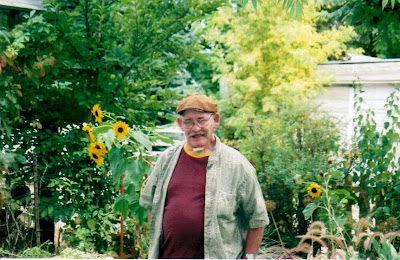 [Note: Monte Riek's life story came to me by way of his niece, Cass Sullivan, in the form of 20 single-spaced pages. He had written his life story as part of his participation in Alcoholics Anonymous (written because he had lost the ability to speak). That is, his life story was meant to be shared. Please feel free to share Monte Riek's story, to make links, to re-post, etc.]
Posted by Michael Kimball at 10:16 AM

This was really moving to read--

I have goosebumps. I'm serious. If I figured correctly, Monte was sober for a good 13 years. What a blessing not only for him, but for those who loved him. And now for me.

what a beautiful, beautiful story, a life lived and mended. thanks for sharing this with us, Monte's family & michael

Gina, I'm glad you thought so. It was moving to write too. It almost overwhelmed me a couple of times.

Susan, I hadn't thought to mention it, but the same thing happened to me a couple of times, the goosebumps. Does anybody know why that is?

Maggie, yes, absolutely -- and it's meant to be shared.