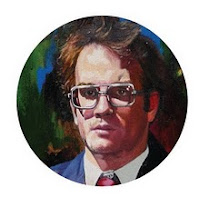 Adam Robinson has lived in a bunch of different cities, but that probably doesn’t matter. His childhood was not notable except for the fact that he often ate lunch in a bathroom stall during his junior year of high school and except for all of the God stuff that he grew up with. He went to a Christian college, but only because his brother, his almost Irish twin, did. The Christian college was awesome for Adam (though it must be noted that this word often accompanies descriptions of religious experiences) and it was there that he learned that life is really terrible unless everybody forgives each other. Adam continues to be a Christian in spite of the fact that Martin Luther consummated his marriage to Katherine von Bora in front of his friends (or, possibly, because of this fact; it isn’t clear). Said another way, Adam is a dark and sad Christian like St. Paul. Also, once, Adam hid out all night in a porta potty at an amusement park so that he could see some bands that he really wanted to see the next day. The next day, a family he kind of knew gave him a washcloth so he could take a shower. Now Adam works as a technology buyer for an asset management company, but that doesn’t really describe him. It isn’t who he is. He is a guitar player for Sweatpants and the publisher of Publishing Genius and a writer of poems and stories and songs, but he cannot be fully understood in these terms either. It is better to think of Adam in terms of the time he jumped out of a speeding boat (that he was driving) and crashed it. The boat didn’t sink and Adam didn’t drown. The boat got stuck in some seaweed and Adam swam back to shore. Adam made a similar jump the time that he left behind his life in Milwaukee and ran away to Baltimore with Stephanie Barber, who is awesome (like Christianity, but in a different way). The experience was panicked and great. Another time, Adam was attacked while waiting for the bus and hit over the head with a bottle, but the attackers escaped with nothing of Adam's and Adam ended up with a bloody story to tell. One thing that should be learned from this: You cannot stop Adam Robinson. Also, it should be noted that the farthest Adam has walked at one time is 28 miles and the farthest he has ridden a bicycle is 34 miles. He could go farther, though. He will go farther. In fact, there he goes now.

[Update: Adam Robinson's first book, Adam Robison and Other Poems is now available for pre-order from Narrow House. Plus, he is the genius behind Publishing Genius--short, massive books since 2006.]
Posted by Michael Kimball at 12:12 PM