David Shane White goes by David if you're speaking with him but in written forums he prefers D.S. White. D.S. was born on July 6, 1970 in Houston, Texas. He moved to Hermosa Beach, CA, with his father when he was 12, dropped out of high school during his junior year. He went to work for a bookstore instead. He played baseball feverishly until age 16 and then pitted himself in the spectator's chair, where he has remained. Baseball is where his heart lies. At one point, D.S. spent more than six years homeless on the streets of downtown L.A., strung out on heroin and cocaine. He lived in the abandoned Ambassador Hotel for 6 months staring at the ghosts of F. Scott and Zelda Fitzgerald. He was eventually found and thrown out during a S.W.A.T. team exercise. Unknown to him at the time, the police occasionally used the facility for training. After being awakened one morning by three fully armored and aggressive officers holding sub-machine guns, they all agreed that it was time for him to leave. D.S. is unique in his ability to enjoy the company of most people. From artists to the mild, rich to homeless, he tends to think people are interesting. He met his wife of three years, Joanna, at the Seattle public library. He was using a video camera at the time so has the first time he ever saw her recorded. They are like-minded in their tastes for the arts. Gary Lutz, George Saunders, Pynchon in the books. Animal Collective, Can, and Nick Cave, musically. In film, they both enjoy Kurosawa, Von Trier, and P.T. Anderson. D.S. and Joanna generally view the world with the same lens. Resurrecting the relationship with his family is the greatest of D.S.'s accomplishments. He allowed it to disintegrate through criminal activity, lies, and drug abuse and spent years regaining some of the trust people once had for him. He doesn't know if he'll ever regain it all but will take whatever he can get. D.S. currently manages an autograph memorabilia business. Some of his favorite items include: a Dalai Lama signed baseball and a wooden spoon signed by John and Yoko. For now, it's the same old thing. Searching for a calm, quiet spot in a warm corner of the universe to share with his loved ones and his cats, a few treasured books and records, and an unlimited supply of ink and paper to draw and write his story on. 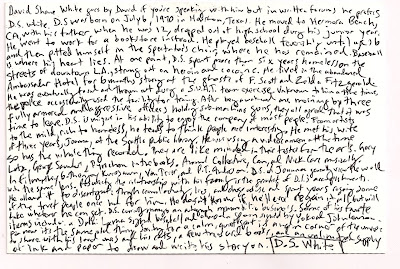 Posted by Michael Kimball at 8:15 AM

Its a common thing among People sharing our joys and sorrows with others. Many People go in the way, by means of Postcard. Its an additional thing that there is an excellent designs to express our thoughts.