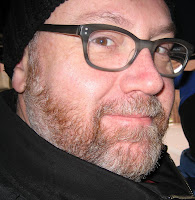 Shawn Vestal was born in Gooding, Idaho in 1966, the oldest of six kids in a Mormon family. He liked reading and writing and sports, assuming he’d become a great athlete, but that didn’t happen. When Shawn was in 5th grade, his dad went to prison for embezzlement. Shawn thought he had this happy, middle-class home, his dad a businessman and church leader, respected in the community, but just before his arrest he took the family on the lam up to Canada, fleeing the law, something Shawn remembers little about. It was a strange, sickening time, the running, the arrest, the publicity, the financial straits that followed. Today, when Shawn visits his siblings, they find themselves talking about it—as though none of them quite took it in and are now trying to remember. Shawn became hyper-self-conscious and too worried about the opinions of others. He wrote a column for the local weekly when he was in junior high and high school, trying to be Mike Royko. He wrote his first stories and poems then too. His father kept screwing up, going back to jail, becoming so different from the person Shawn thought he was, a shady guy to the core. Shawn still feels ashamed about it sometimes, which pisses him off, because it’s time to be over it. His mom was great, but he was angry at everything in his home life for a while, including the church, a kind of Jekyll and Hyde thing: He was nice and patient, except for outbursts of temper or emotion; his sense of humor became aggressive and mean-spirited. As a teenager, many of his friends were non-Mormons, and while he liked plenty of Mormons, they weren’t the people he wanted to emulate. He abandoned the Church and went to the University of Idaho, then dropped out and took what he thought would be a temporary job at the newspaper back home. He wanted to be a fiction writer and thought he was slumming, but he liked the work and took other newspaper jobs. He wrote fiction all along, though not with sustained effort, most of his energy directed toward journalism, especially as he became an editor at smaller papers, where you can work forever and not get everything done. He met his wife, Amy, when they were both reporters at the Coeur d’Alene Press. She’s strong and constant in hard times, and they’ve been together 17 years. One day in 2004, two Mormon missionaries came by the house, and Shawn asked if there wasn’t some way he could stop these visits. One of them offered excommunication. Shawn thought that was awesome, and was formally excommunicated, got a letter and everything. But the missionaries keep coming. “About As Fast As This Car Will Go,” Shawn’s first published story, came out in McSweeney’s in 2007. When he got the e-mail accepting it, he was at his job at The Spokesman-Review and did a little celebration dance. He must have tried 400 times to get stories in magazines, submitting fiction for almost 20 years. One week after that story appeared, Tin House took a story, and even better, Shawn and Amy’s son was born. Cole is amazing and has made Shawn more hopeful than ever before. After recently finishing a collection of stories, Shawn gave it a title suggesting lost faith, abandonment, and wilderness, and which, mainly, he just thinks sounds cool—Godforsaken Idaho. He’s had almost no contact with his dad in 23 years, but may talk to him again someday. If so, he doesn’t want to accuse or question him. He won’t be cruel.

[Note: You can read Samuel Ligon's postcard life story here and the one Sam wrote for me here. ]
Posted by Michael Kimball at 11:04 AM

Great story! Is Shawn still in Idaho? Where can I read his book? I would love to read it.. I am in GF Idaho too - Wendy favoriteplanet@yahoo.com

Hey, Wendy. Glad you liked Shawn's story. He's close to done with that
collection, and my guess is that it will be published some time pretty soon. He's crossed the border from GF Idaho, and now lives in Spokane, WA.