#016 The Life of Rob Brulinski 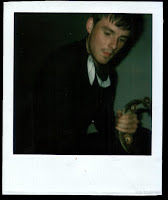 Rob Brulinski was born in 1988 in Towson and moved to Baltimore when he was 3. He was introduced to computers when he was six and this would have a great influence on his life. The other great influence was his grandfather, with whom he would sneak into TV shoots and movie theaters. He also began hacking, that is sneaking into other peoples computer systems. He will, for the rest of his life, do things that he isn't supposed to do. He will go to church without believing in God. He will sleep in his car instead of his house. He will be an incredible success in spite of all of this—or because of it.

Rob Brulinski's Inner Numb
Posted by Michael Kimball at 9:28 AM