#46 Karen Lillis: The Things That Saved Her 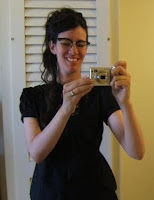 Karen Lillis was born on Friday the 13th under a full moon, which led to her being quiet and dark. She moved 7 times by the time she was 7 years old and this made her restless. She didn’t want to stay in one place long enough to get hurt. Besides, moving was always hopeful and buoyant. She narrated the receding back window scenery to her baby brother as they traveled across America. In her youth, Karen was conspicuously tall, skinny, and smart. Accordingly, the kids at school taunted her from head to toe, which led to nicknames like Ethiopia, Four Eyes, and Rex. Because of this, in part, Karen didn't talk in public until about age 15. She escaped the taunting for college and fell in love with Thomas. Their first kiss was at a train station, but they later broke up and he became The One Who Got Away. Karen became obsessed with taking photographs of train tracks and train stations. She may have been looking for Thomas where she last saw him. She felt hopeful when she looked down the train tracks. She thought her future was in the distance. Karen further escaped to NYC, which saved her from being a rag doll or going crazy. Another thing that saved Karen was writing and the cross-country book tour (see moves, above) that she took to support his her first book (she’s now published three). In NYC, she became irresponsible and preferred affairs to relationships. She wanted people to leave her. It reminded her of Thomas, who she found again—14 years after they broke up—when he applied to the store where she was working at the time. She asked him to set her free and they got back together a few weeks later. Now they are engaged and living in Pittsburgh, where they are going to stay, at least for a while.

Karen's Myspace page
Posted by Michael Kimball at 7:37 AM

Hi. I got here through an emailed link. That's a great life story. And a great project!

Thanks, Susan. I'd be happy to write your life story if you're interested. Best, Michael

i like this project. it takes the fifteen minutes thing down to a postcard.

sometimes i think we have forgotten how to listen to each other. this project addresses that.

karen is my friend, that's how i found you.

Thanks, Jessica, And, yes, I try very hard to listen to what I'm being told--both the content and the story around the content.

Karen is awesome! And what a story. *sighs* Very romantic.